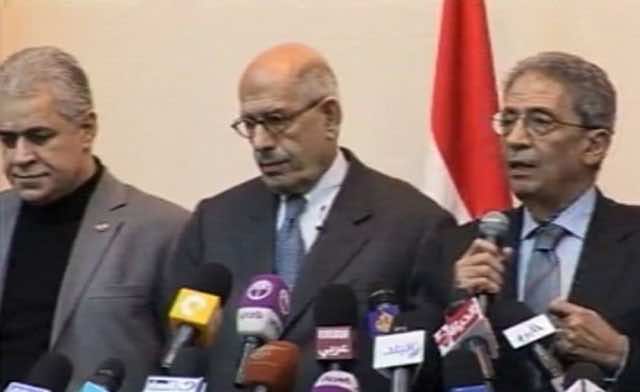 Egypt’s main opposition will meet Monday to consider its response to President Mohamed Morsi’s call for a national dialogue aimed at ending the crisis gripping the country, an opposition member told AFP.

Egypt plunged into a new crisis after the deaths of 46 people in three days of violence across three provinces, prompting Islamist Morsi late Sunday to impose a month-long state of emergency in the riot-hit regions.

Facing stiff resistance from an opposition of mainly leftists and liberals, Morsi also called all political forces to a national dialogue.

“The National Salvation Front will meet” in the early afternoon to determine its position, said Hussein Gohar of the Egyptian Social Democratic Party, a member of the NSF.

In a statement late Sunday, Sabbahi’s movement expressed its “refusal to participate amid the continuing bloodshed and continuing crimes by the regime against demonstrators”.

It said it believes that “any serious call for dialogue needs real guarantees for success, the most important being that the president offers political solutions and security.”

Morsi’s reaching out to the opposition came after at least 46 people were killed in three days in Suez Canal cities, with the deadliest clashes in Port Said where 37 people lost their lives.

The rioting in Port Said began on Saturday after a Cairo court handed down death sentences on 21 supporters of local football club Al-Masry over football violence last February that killed 74 people.

Despite the state of emergency and the announcement of the curfew, residents of Port Said demonstrated into the night and are preparing for new rallies on Monday, witnesses said.