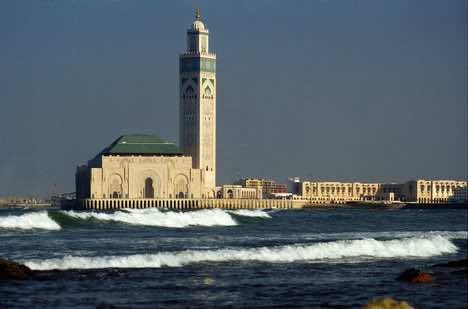 The Moroccan metropolis Casablanca ranks in the 45th position in the American newspaper The New York Times top 46 best travel destinations for the year 2013.

Casablanca is the only Arab city to be listed in the New York Times selection.

The Moroccan white city has been overshadowed for many years by more exotic cities like Marrakesh and Tangiers. Nonetheless, the Moroccan Metropolis continues to appeal to many tourists.

Casablanca boasts a hybrid architecture adorned by the tokens of colonial times and futuristic designs like the famous Morocco Mall with its titanic proportions.

The New York Times described Casablanca as an “open air architecture Museum” with its fascinating artifacts of the 20th century architecture.

The newspaper referred to the Cinema Rialto as well as the newly built Twin Center, a complex of two skyscrapers that lie in the heart of Maarif district, setting a unique architectural landscape in the Arab world.

The white metropolis has also made another leap towards modernity after the opening of its first line of a large tramway system.

The New York Times Top 46 lists the most appealing travel destination for the year 2013.

The Brazilian city Rio de Janero ranks first, thus staging its comeback with the 2014 World Cup and 2016 Summer Olympics not to mention its oil boom providing the Brazilian city the status of a sophisticated cultural hub.

The French city Marseille ranks second with its vibrant ethnic diversity as well as its avant-garde art performances and exhibition spaces.

Unexpectedly, Bhutan a small country in the Himalayas ranks fifth. Bhutan represents a model in the balance between the cultural and natural ecosystem and tourism revenues by calibrating the number of visitors.

The Turkish city Istanbul ranks 10th on the list. Istanbul has become a vibrant cultural hub with its busy cultural calendar and the opening of more galleries and cultural centers.

Surprisingly, Paris ranks at the bottom of the Top 46 of best destinations for 2013. The New York Times considers that the baroque city lost some of its appeal.