Morocco World News
Home Highlights on Morocco Mohammed El-Fizazi, another victim of violence falls in the university of Fez 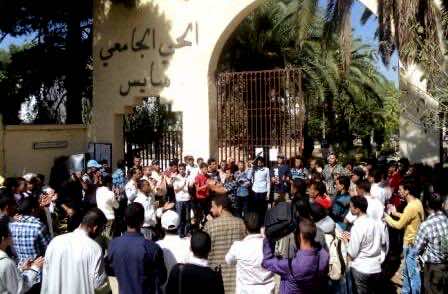 The University Sidi Mohammed Ben Abdellah in Fez is still on the top of Moroccan universities when it comes to violence.

This past Saturday, January the 26th, Mohammed El-Fizazi, a student in the Faculty of Arts and Human Sciences, Sais-Fez, died under the effect of the serious injuries he allegedly received on the head and the chest after an intervention by Quick Response Forces at the university campus, Sais-Fez on January 14th and 15th.

A week prior to his death, Mohammed El-Fizazi was transported to the university hospital Al-Hassan II where his interior severe bleeding in the head led him to death.

Students sources from the Faculty of Arts and Human Sciences, Sais-Fez told Morocco World News that Mohammed El-Fizazi was one of several students who got badly beaten by the Quick Response Forces while they were gathering in a “halaqiya” (annular gathering) on the rights of students to benefit from the campus restaurant and lodging.

Other sources said that the students were detaining some workers inside the campus, which entailed the intervention of the police to release the workers.

In a video on YouTube by Fez News, Mohammed El-Fizazi’s father directly accuses the Quick Response Forces of killing his son.

He says: “I sent my son to the university to study [ …] He didn’t belong to any student faction nor to any ideological group and his friends and teachers know him […] They beat him to death, why did they beat him?”

Whatever the claim is, violence in the University of Fez has taken the lives of many students before such as Al-Maaté Boumli (1991), Adil Al-Ajraoui (1987), Zoubida khalifa (1987), and many others. This violence is, sometimes, the result of ideological difference between students or the result of Quick Response Forces interventions.