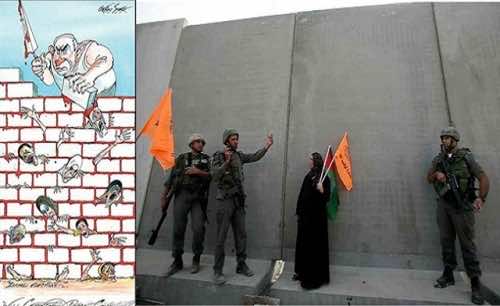 “For the people of Israel, this is a cartoon which recalls the dark journalism from one of humankind’s darkest periods,” Knesset speaker Reuven Rivlin wrote in a letter to his British counterpart John Bercow.

The cartoon caused particular offence because it appeared on International Holocaust Remembrance Day.

“As a democrat, I support political criticism but in publishing this cartoon yesterday in London, the boundaries of free speech were crossed,” Rivlin wrote, adding, “prejudice had deeply influenced legitimate criticism.”

“If a cartoon had been published in Israel showing Britain in a monstrous light and hurting the feelings of the British people in such a mean and nasty way, you wouldn’t hesitate to complain to me, and rightly, about crossing the legitimate boundaries of freedom of expression,” he said in a direct appeal to Bercow.

Rivlin said Israel was “disappointed” that such images could be published in modern-day Britain, suggesting the cartoon exposed “certain unhealthy undercurrents.”

But, writing in the left-leaning Haaretz newspaper, commentator Anshel Pfeffer criticized condemnation of the cartoon, which he said “was not anti-Semitic by any standard.”

He pointed out that the cartoon included no Jewish or Holocaust imagery and was not similar to traditional “blood libel” cartoons.

The cartoon appeared a day after a British parliamentarian was forced to apologize after he used his blog to criticize Israel’s treatment of the Palestinians, accusing “the Jews” of perpetrating daily atrocities and drawing parallels with the Nazi Holocaust of World War II.

The remarks by Liberal Democrat MP David Ward sparked a wave of intense criticism on social media sites and from campaign groups, prompting him to issue an apology on Saturday, saying he had not meant to “to offend the Jewish people as a whole, either as a race or as a people of faith.”