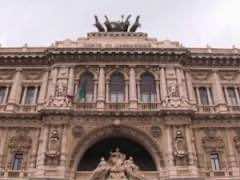 Italy’s highest appeal court Monday ordered the government to compensate the families of those who died in a mysterious aviation disaster near Sicily more than three decades ago.

Eighty-one people were killed when the Itavia DC-9 aircraft, en route from Bologna to Palermo, exploded on June 27, 1980, near the island of Ustica, off the coast of Sicily.

Though the cause of the disaster remains unclear, the court said the Italian state “clearly had an obligation to ensure the safety of flights” through sufficient civil and military radar monitoring.

The court returned the case to the lower appeals court in Palermo to determine the amount of compensation due to the families of three of the victims who initiated the court case. The families of other victims later followed suit.

In 2007, the highest court of appeal acquitted several high-ranking Italian military officials of charges that they hid vital evidence related to the disaster.

The cause of the disaster remains unclear.

Several Italian experts believe the plane may have been hit accidentally by US and French fighter jets chasing one or two Libyan aircraft trailing the DC-9 to avoid radar detection.

Another theory, also involving the fighter jets, is that one of them crashed into the aircraft.

The discovery of the wreckage of a Libyan MiG-23 in Calabria, in southern Italy, the month after the disaster supports that hypothesis.

Both Paris and Washington have denied their aircraft played any role in the tragedy.