Morocco World News
Home Highlights on Morocco Right groups call on the government to probe the Murder of a... 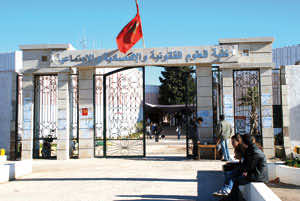 The death of Mohamed El-Fizazi last Saturday, January 26th, in the University Hospital Hassan II in Fez continues to stir different reactions and responses. The Moroccan Center for Human Rights called for an independent and impartial investigation into the death of Moahmmed El-Fizazi.

In a statement to the public, the Moroccan Center for Human Rights stressed that Mohammed El-Fizazi died “as a result of the intervention of Quick Response Forces on January 14th and 15th, 2013 against students living in the university campus of Sais-Fez. The intervention is described by many observers as excessively violent.”

The human right center, thus, called for a transparent investigation to clarify the circumstances leading to the death of Mohammed El-Fizazi and take the necessary legal decisions against all those involved in his murder.

The regional board of the Moroccan Association for Human Rights in Taher Souk, 60 miles north east of fez, the birth place of the deceased, issued a statement to the public opinion condemning in the strongest terms the repressive style which resulted in the death of the student Moahmmed El-Fizazi.” The board also holds the security forces responsible for the death of Al-Fizazi and “demands a thorough investigation into the tragedy and the trial of the criminals.”

The 20th February Movement in Fez issued a strongly worded statement which was obtained by Morocco World News. The movement, which has been asking for political change in Morocco since February 20th, 2011 strongly “condemns the brutal intervention against the students who were struggling for their most basic rights (food and lodging).”

The movement also calls for “the prosecution of all those involved in the crime of January 14th and 15th which led to the martyrdom of the student.”

The latest news coming from Taher Souk say that the delay in delivering the corpse of the deceased to the family left a state of indignation and anger not just in the family but in the whole village. This delay is attributed to the fact that the corpse is taken to another hospital for a forensic autopsy to investigate the real causes of death.

It should be noted that many students from the University of Fez told Morocco World News that the university is expected to be on a ‘hot tin’ the coming weeks if students decide to boycott classes or protest against the violence that led to the death of their friend.