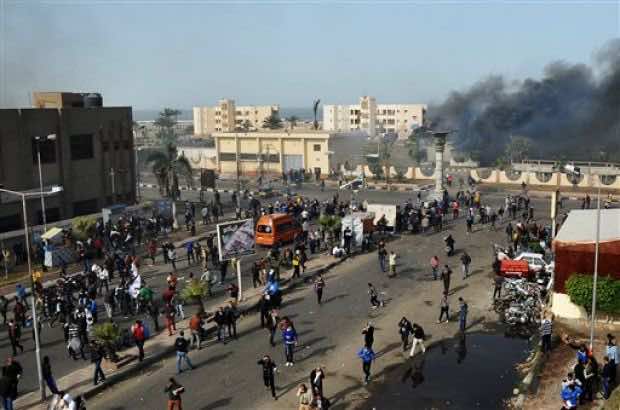 Another three people have been killed in the political violence sweeping Egypt, medics said on Tuesday, pushing the death toll from five days of clashes to at least 52.

Two people died in fighting between protesters and security forces in the riot-hit canal city of Port Said on Monday, including one in front of a police station, medics said, while one person was shot dead in Cairo when protesters and police clashed near Tahrir Square.

President Mohamed Morsi on Sunday imposed a month-long state of emergency and night-time curfews on Port Said, Ismailiya and Suez, the three provinces most affected by the rioting.

But witnesses said thousands of demonstrators flooded the streets of the three Suez Canal cities Monday night in defiance of the curfews.

The protesters chanted slogans against Islamist rule in Egypt, “Fall, fall the rule of the guide (of the Muslim Brotherhood), referring to Morsi who hails from the Brotherhood.

Opposition groups accuse Morsi, the Muslim Brotherhood and other Islamists of monopolising power in Egypt.

The violence first erupted Thursday and gained momentum Friday when protests marking the second anniversary of the start of the uprising that toppled former president Hosni Mubarak turned into clashes around the country.

On Saturday, violence exploded in Port Said after a court sentenced to death 21 supporters of a local football club for their involvement in a deadly soccer riot last year.

Soon after sentence was passed, rioters attacked police stations as well as the prison where the defendants were being held, sparking clashes with security forces that left 42 people dead at the weekend.

Clashes have also broken out daily in and around Cairo’s Tahrir Square, although the capital’s iconic hub of protest remained calm Tuesday morning.

The wreckage of a burned police car was still to be seen in the middle of the square. Protesters claim the vehicle was seized from near the US embassy and then brought to the square where it was set on fire.

A medic said that they had “treated many people who came with problems from tear gas or injuries caused by rubber bullets” resulting from clashes around the square on Monday night.