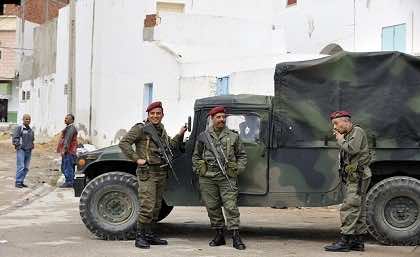 Tunisia has deployed special forces near oil and gas sites in the far south, close to the Algerian border, in the wake of the In Amenas hostage-taking attack, security sources said on Tuesday.

The deployment, which began over the weekend, will reinforce military units already stationed in the desert “in order to protect oil and gas sites around the region,” said a security source in southern Tunisia.

Extra troops and military equipment have been sent to the barracks at Remada and Dehibia, an isolated zone near the country’s borders with Libya and Algeria, according to the source, who requested anonymity.

The deployment according to the source is a “precautionary measure” after the hostage-taking by Islamist militants at the In Amenas gas field in southeast Algeria earlier this month, in which at least one Algerian and 37 foreign hostages were killed.

In Amenas is located around 250 kilometers (150 miles) south of the Tunisia border, and Algerian officials said 11 of the 32 assailants were Tunisian.

“These measures seek to prevent any terrorist attack targeting the (Tunisian oil and gas) fields, especially those situated along the Tunisian-Algerian border,” said another security source, quoted by the official TAP news agency.

Contacted by AFP, a Defense Ministry spokesman was unable to confirm the information.

The desert shared by Libya, Tunisia and Algeria has long been a smugglers’ haven, but according to the Tunisian authorities, it has now become a key arms trafficking zone for supplying weapons to jihadists in northern Mali.