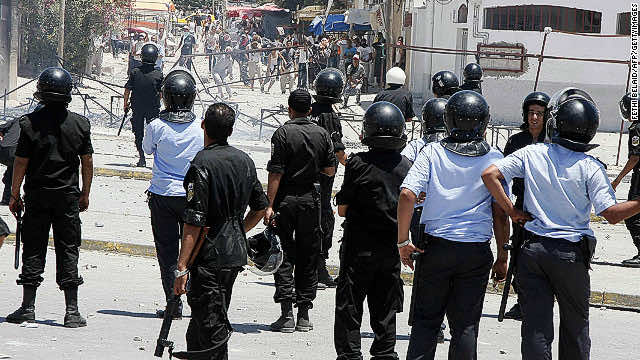 A military tribunal on Tuesday handed two police officers jail terms of 10 and 20 years respectively for the “voluntary and involuntary homicide” of five Tunisians killed during the 2010-2011 uprising.

The tribunal in the central city of Sfax sentenced Commander Mourad Jouini to 10 years in prison and Lieutenant Bassam Akremi, in absentia, to 20 years, a court official told AFP.

The accused were implicated in the deadly repression of protests in the central town of Regueb, 50 kilometres (30 miles) from Sidi Bouzid, site of the start of the uprising that toppled ex-dictator Zine El Abidine Ben Ali on January 14, 2011.

A police crackdown on protests in Regueb left five people dead and 32 wounded.

The verdict had been expected for months, but was repeatedly delayed without explanation, as has been the case in numerous others trials of this kind.

Two years after the revolution, Tunisian courts have been criticised for taking too long to try numerous security officials accused of taking part in the repression of protesters, which killed more than 300 people according to the UN.

Human rights organisations have complained in particular about the cases being tried by military tribunals, while the government has come under fire for failing to draw up a final list of those killed and wounded in the uprising.