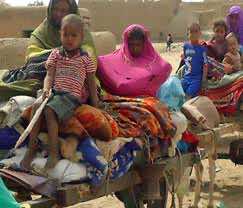 Hundreds of Malians from the rebel-held northern town of Kidal have fled towards the Algerian border, the UN’s refugee
agency said Tuesday, adding that some had even crossed the officially closed frontier.

Residents had fled the town “to villages further north, even closer to the Algerian border,” UNHCR spokesman Adrian Edwards told reporters in Geneva. “Others have crossed the border into Algeria.”

Algeria closed the long desert border with its neighbour earlier this month after French and Malian troops launched an offensive against the Islamist rebels who have been occupying Mali’s vast north since last year.

“The supply of food and other essential items has been seriously affected by the conflict and the closure of the border, across which many goods used to be imported,” Edwards said about the Kidal area.

After the recapture of the key northern towns of Timbuktu and Gao in recent days, Kidal is the last Islamist bastion left for French-led forces to reconquer.

Many of the Islamists who fled their strongholds before the soldiers arrived are believed to have melted away into the hills surrounding Kidal, 1,500 kilometres (932 miles) northeast of the capital Bamako.

Edwards also said the UN agency had been receiving reports of “rising tension between ethnic communities” in the war-torn country.

“In particular, members of the Tuareg and Arab communities are reportedly being blamed by other groups for supporting the separatist rebellion which led to a the present conflict,” he said, urging “initiatives to promote peace and
reconciliation between various ethnic groups”.

Gao, Timbuktu and Kidal were seized by an alliance of Tuareg rebels — who wanted to declare independence of the north — and hardline Islamist groups last April.

The Islamists hijacked the rebellion and sidelined the Tuaregs to implement radical Islamic laws.

In total, around 380,000 people have fled northern Mali since the conflict began a year ago, including more than 150,000 who have sought refuge in neighbouring countries, according to UNHCR numbers.

The UNHCR said Tuesday it was urgently bringing relief items into Mali for 9,000 families, or some 54,000 people, including sleeping mats, blankets, mosquito nets and cooking utensils.

It said a first distribution was set to take place Tuesday in the central town of Mopti, which is home to some 40,000 displaced people.

The UN’s World Food Programme (WFP) also said Tuesday that it had resumed food distributions to 22,000 displaced people in the town, which had been postponed due to the fighting.

The WFP meanwhile said it aims to reach around 530,000 people with emergency food aid in Mali this year — more than 400,000 of them in the north.