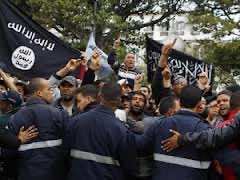 Two Tunisian security agents were wounded in a gunfight with suspected hardline Islamists during a night time operation in the western town of Kasserine, police said on Tuesday.

“The special operation targeted three people suspected of belonging to a Salafist group,” said a senior police official in Kasserine.

One of the suspects was seized, but his companions opened fire, wounding two security agents, and all three managed to escape in the confusion, abandoning a Kalashnikov assault rifle.

One of the security agents was badly wounded in the leg.

Security patrols and “sweeping” operations have been launched in the region to hunt for the suspects, the same source said.

The three suspected Salafists are linked to a jihadist group the authorities pursued last month in western Tunisia, near the Algerian border, after a deadly attack there, according to a national guard source.

At the time, security forces arrested 16 men suspected of belonging to a group with ties to Al-Qaeda in the Islamic Maghreb, and recovered weapons thought to have originated from Libya.

But another 18 people were still being sought.

Since the 2011 mass uprising, Tunisia has witnessed a wave of attacks blamed on Salafists, and President Moncef Marzouki has warned of the perils of arms trafficking in North Africa since the fall of Moamer Kadhafi in neighbouring Libya.

The desert shared by Libya, Tunisia, Algeria and Mali has long been a haven for smugglers but the presence of jihadists has added a new dimension.

Algerian officials said 11 of the 32 Islamist gunmen who overran the In Amenas gas field earlier this month seizing hundreds of hostages were Tunisian.

Tunisia has deployed special forces near oil and gas sites in the far south, close to the Algerian border, in the wake of the deadly In Amenas attack, a security sources said on Tuesday.