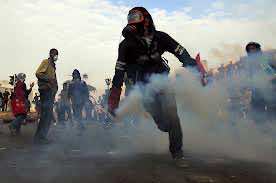 Egypt’s judiciary has ordered the arrest of members of the “Black Bloc”, a shadowy group of militants who have appeared
among protesters during the latest clashes with police, a judicial source said Tuesday.

Prosecutor General Talaat Ibrahim Abdallah has authorised the arrest “of all people suspected of belonging to the group and ordered that they be brought before the courts,” the source said.

The demonstrators, their faces hidden by black masks, have appeared among stone-throwing protesters during the deadly riots which have rocked Egypt since  Thursday.

“Inquiries have shown that the Black Bloc is an organised group which carries out terrorist actions,” said the prosecutor general’s spokesman Hassan Yassine.

Presenting themselves as the defenders of protesters opposed to Mohamed Morsi’s rule against the president’s Muslim Brotherhood supporters, they reportedly model themselves on anarchist groups of the same name in Europe and
the United States.

Photographs showed them celebrating around a police armoured vehicle in flames in the middle of Tahrir Square this week, waving V-for-victory signs.

The origins and leadership of the group is shrouded in mystery and the extent of its membership unknown.

At least 52 people have died in the latest wave of violence, which first erupted on Thursday. It gained momentum on Friday, when protests marking the second anniversary of the start of the uprising that toppled long-time president Hosni Mubarak turned into clashes around the country.

On Saturday, violence exploded in Port Said after a court sentenced to death 21 supporters of a local football club for their involvement in a deadly soccer riot last year.