Morocco World News
Home Highlights on Morocco Moroccan writer provokes Islamists by a hot kiss with his wife on... 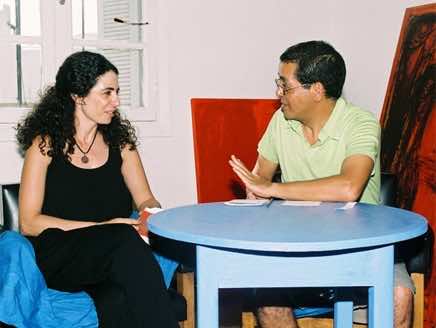 As a Reaction to the uproar caused by the complain of the Justice and Development Party members on a Egyptian plane over a hot kiss shown at the beginning of the movie Spiderman, Moulim El Aroussi, a Moroccan writer, published a hot kiss with his wife on the social networking site Facebook.

“Let us react against this mediaeval tendency to limit our freedoms, and promote the clean art. I invite everyone to change their profile picture today and for one week by a photo that shows love and tenderness” El Aroussi wrote on his profile photo.

The sensual photo showing him in a hot kiss with his wife Kenza Benjaloune, Moroccan artist, didn’t pass on without harsh criticism.

“Next time you need to appear stark naked and in full action in order to show more freedom! To kiss one’s wife is legal, but not in public … Decency has really disappeared!!” a girl commented on the photo displayed by the writer.

El Aroussi wrote on his Facebook wall that “Kenza’s Facebook account was hacked this morning, and the “Mujahid” who hacked it left this message” “the Facebook account has been hacked and all the friends are deleted, now make love to one another because no one will see you.”

It is noteworthy that Saadallah Ibrahim, the writer who inspected what happened on the plane, said that the scene of a hot kiss at the beginning of Spiderman, screened by EgyptAir on flight (847), en route from Cairo to Casablanca almost caused a disaster after the (PJD) members voiced their disapproval of the scene.