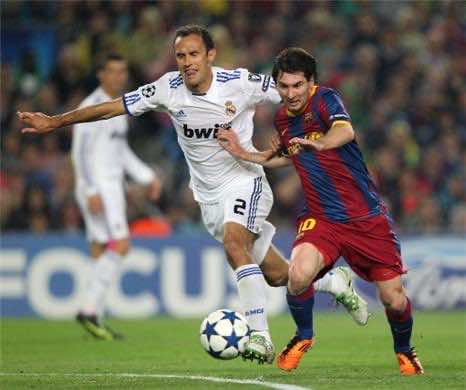 Spain’s football titans Barcelona and Real Madrid will collide for the third consecutive season in a Copa Del Rey classico on Wednesday.

The two teams will clash in the first leg of the spanish cup semi-final at the Santiago Bernabeu stadium for the right to face either Ateletico Madrid or Sevilla in the final.

Barça will enter the game while enjoying a 15-point advantage in la Liga over their eternal rivals who will seek to avenge last season’s defeat in the quarter-finals of the spanish cup that Barça eventually won.

Los Merengues will be facing the Catalans with key players missing like Angel di Maria, Pepe, Sergio Ramos and Iker Casillas who fractured a bone in his hand in the previous round against Valencia.

As a reaction to missing their key goalkeeper, Real Madrid officials quickly signed with Diego Lopez from Sevilla last Friday as cover, for 3.5 million dollars. Still, he will seat on the bench in tomorrow’s game as Antonio Adan will be in charge of keeping his team’s net clean when they face the league’s best attack, led by Lionel Messi.

Real Madrid’s star, the portuguese Cristiano Ronaldo, will miss the second-leg match scheduled on February 27th in Barcelona if he picked another yellow card after he has already picked up two in the cup.

Ronaldo scored seven goals in the last six meetings against Barcelona, and he has told his club’s TV station that the game can’t come quick enough.

“It’s an important but complicated game for us against one of the most difficult teams in the world, but it should be a big night. We’re at home and have a good chance. But we’ll have to play well, we know Barca have a great team but I’m looking forward to it,” he said.

“It will be an even game, it doesn’t matter who is out for them, we must focus on our own game. The tie won’t be decided in the Bernabeu so a good result for us would be a win, not a draw” he said.

Real Madrid’s biggest Cup win ever over Barceolana came in 1943, beating their rivals 11-1 in the second leg of the semifinal. Barcelona’s biggest win is 6-1 from the 1957 quarterfinals second leg.