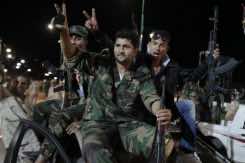 There are still 200,000 armed fighters in “revolutionary brigades” in Libya, a top UN envoy said Tuesday, expressing fears that Mali’s conflict could spillover into the country.

Foreign governments have raised concerns about security in Libya and UN envoy to the country Tarek Mitri said France’s military campaign in Mali had opponents in Libya.

“Opposition of armed radical groups to the military intervention in Mali may exacerbate the situation given ideological and/or ethnic affiliations as well as porous borders in Libya,” Mitri told the Security Council.

He said that border security was a “concern” because of unrest in Libya, particularly around the eastern city of Benghazi, and “the possible impact of recent developments in Mali.”

Mitri told reporters after the meeting there are up to 200,000 armed men in the revolutionary brigades that overthrew late dictator Moamer Kadhafi who are still not under government control.

He added that an estimated 7,000 prisoners are still being held in jails run by the militias since the fall of Kadhafi in 2011.

But he acknowledged problems. “They know they cannot extend the authority of the state to the whole of Libyan territory, they are aware that they do not have the monopoly of the use of force,” Mitri told reporters.

“Senior Libyan officials whom I met recently stressed their concern over the situation in the east and pledged to provide better security to the diplomatic community and the citizens of Benghazi,” Mitri said.

Britain reaffirmed its security fears on Monday when it said it had identified a “potential threat” to its embassy in Tripoli, days after warning of a threat to Westerners in the eastern city of Benghazi.