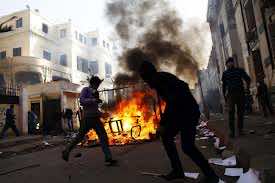 Both of the victims, neither of whom was identified, were hit by buckshot. One died at the scene, while the other died in hospital.

Their deaths bring to four the number killed in Cairo and to 54 the nationwide total since violence broke out on Thursday.

Most of the deaths have been in Port Said, where clashes erupted on Saturday after a court issued death sentences against 21 supporters of a local football club for their role in deadly riots last year.