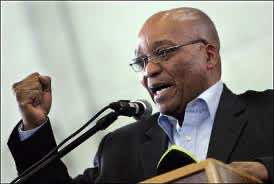 South African President Jacob Zuma claimed the war in Mali was a consequence of Western powers forcing the overthrow of Libyan leader Moamer Kadhafi, in a radio interview broadcast Wednesday.

Describing the situation in Mali as “quite grave” Zuma told Paris-based RFI that “it is important to look at Mali as a consequence of how we handled Libya”.

Under Zuma, South Africa had vociferously opposed the NATO-led military intervention to oust the Libyan dictator.

Zuma instead backed an African Union (AU) plan, which rebels rejected on the basis that it would have allowed Kadhafi to share power.

“The AU had a roadmap to handle the Libyan situation, Kadhafi himself had agreed, but the bigger people who have the power felt they must take him out,” Zuma said.

He said that created a vacuum, which allowed lawlessness in Libya and spread arms across the region.

“Once he was gone there was no leader to control people with different agendas, the arms that were all over the entire Sahel region.”

“We supported that because there was no other alternative,” he said, pointing out that the Malian army had no ability to stop the insurgents.