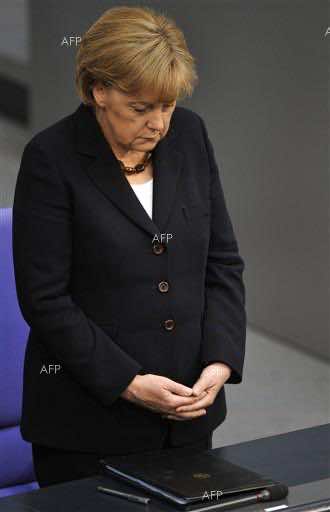 German Chancellor Angela Merkel urged the visiting Egyptian president Wednesday to ensure dialogue remains an option as his country grapples with a political crisis that has sparked deadly unrest.

Merkel told a joint press conference in Berlin with President Mohamed Morsi that Germany wanted a successful transformation process in Egypt, where Morsi took over last year, and was ready to help.

“From my side I made it clear that there are different things that are very important for us,” she said adding: “One is that dialogue with all political forces in Egypt is always available.”

Different political forces should also be able to make a contribution, human rights be maintained and religious freedom “be lived”, Merkel added.

The visit comes after almost a week of violence in Egypt has left more than 50 people dead.

Merkel said Morsi’s visit — his first to Germany, Europe’s biggest economy, since his election in June — was appreciated, albeit shortened, given the “not easy” political situation at home.

It had originally been scheduled to last two days.

Morsi told reporters that Egypt would have “rule of law” and be a state that allowed the exchange of opinions, and spoke of ties with Germany based on respect of different interests “without interference in domestic affairs”.

Most of the deaths in recent days came in Port Said, where clashes erupted Saturday after a court issued death sentences against 21 supporters of a local football club for their role in deadly riots last year.