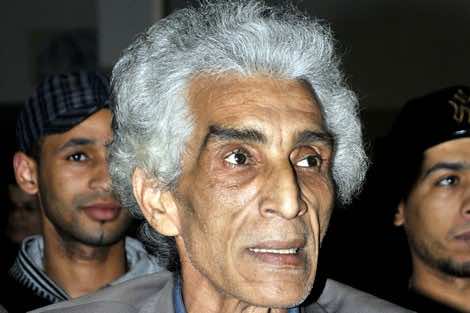 Hassan Mediaf, a distinguished Moroccan actor, passed away this morning at the age of 57 at a Casablanca clinic.

The deceased was suffering for years from Chronic bronchitis, Chronic obstructive pulmonary disease (COPD), for which he had a surgery paid for by King Mohammed VI.

Hassan Mediaf was known in the Moroccan artistic scene thanks to his spontaneity and distinctive physical expressions that enabled him to earn a wide popularity and recognition among professional artists, him to win over the hearts of the public.

Mr. Mediaf started his career from Darb Sulatn in Casablanca with the theatrical group “Lorouba” (Arabism), and participated in many theatrical roles directed by Mr. Mouhamed Tssouli, such as “the price of freedom” and “the truth is dead.”

The collective memory of Moroccan spectators will remember his theatrical works especially with “Firkat Masrah Atamanin” the eighties theater group alongside Aziz Saadallah and Khadija Assad.

The late Hassan Mediaf participated also in many movies like “I wish” directed by Hassan Benjelloun, “Khail Lah” (the horse of God) by Nabil Ayouch, “Free Men” by Ismael Ferroukhi, “Gates of Paradise” and “The Dream Thief” directed by Hakim Noury.

It is worth noting that the Moroccan artistic scene lost another prominent actor, Mr. Mohamed Majd who passed away last Thursday at the age of 73.