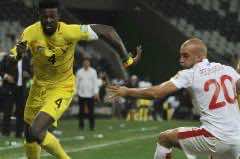 Togo drew 1-1 with Tunisia on Wednesday to complete the Africa Cup of Nations quarter-final cast list and send the Carthage Eagles heading back to Tunis.

After Serge Gakpe’s opener for Togo was cancelled out by Khalid Mouelhi’s penalty the two countries finished level on points, with Togo owing their first appearance in the knockout stages at the seventh attempt to superior goal difference.

Mouelhi then missed from the spot late in the second half, his failure condemning Tunisia to an early exit.

The draw bagged Togo the runners-up spot in Group D and a last eight match-up with Burkina Faso here on Sunday, with the Burkinabe coach Paul Put an interested observer in the stands.

“This is huge for Togo — the first time they have quualified for the quarter-finals. We were the little team in this group, and we’ve made it. I think there will be a big party in Lome tonight,” said Togo coach Didier Six.

Tunisa coach Sami Trabelsi said; “We did what we had to do, we dominated the play, but we lacked a bit of finishing.”

He added: “Am I satisfied with the outcome? Not really.”

Six made two changes, Moustapha Salifou and Jonathan Ayite dropping to the bench and replaced by Vincent Bossou and Ayite’s brother, Floyd.

Skilful midfielder Youssef Msakni started for Tunisia after overcoming a bout of tonsilitis.

Tunisia were once again without injured key striker Issam Jemaa.

Tunisia, requiring two goals now to deny Togo, were struggling to make their presence felt at the Mbombela stadium.

Until the 28th minute that is when they drew back level via Mouelhi’s side-footed penalty awarded when Dare Nibombe fouled Esperance midfielder Hichri.

Tunisia, buoyed by their equaliser, ended the first half the better side, and they had a justified but rejected appeal for a second penalty after the restart when Vincent Bossou felled Darragi.

Down at the other end, Adebayor skipped past a couple of Tunisian defenders, squaring the ball into the box but Komlan Amewou was unable to do the move justice.

On 69 minutes Adebayor’s flying header hit the crossbar as Togo came at the Tunisians with all guns blazing again.

South African referee Daniel Bennett was arguably not having the best of games, making some dubious decisions, not least in the 75th minute when he pointed to the spot after Saber Khalifa tumbled to the floor after light contact by Nibombe.

But Togo won a reprieve when Mouelhi’s poor spot kick hit Kossi Agassa’s left post, and they deservedly held on to set up a date with Burkina Faso.