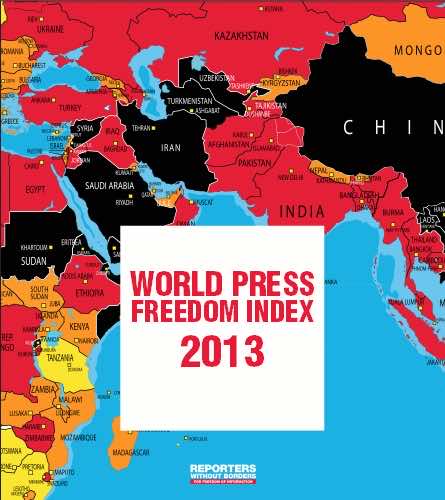 The 2013 “Reporters Without Borders” World Press Freedom Index returns to its usual analysis of Arab Spring countries, after it had previously been caught up in the optimism of the protest movements across the MENA region. Its ranking of countries is no longer related to the political changes taking place across the region.

This year’s index is a better assessment of the governments’ stances and intention towards media freedom in the long and short terms.

Among the criteria taken into account are legislation and violence against journalists. The same is true of Turkmenistan, North Korea and Eritrea, which still occupy the bottom of the index list.

In dictatorships, journalists are threatened with violence, while in democracies, most of them enjoy the right to disseminate information and work as watch dogs of their corresponding governments.

“In dictatorships, news providers and their families are exposed to ruthless reprisals, while in democracies news providers have to cope with the media’s economic crises and conflicts of interest,” Reporters Without Borders secretary-general Christophe Deloire said.

Journalists covering “the Arab Spring” protests have paid a burdensome price in Tunisia, Egypt, Libya, Syria and Bahrain where the winds of ‘the spring’ have blown. Given the fact that physical attacks, trials and a lack of transparency are still the norm in these countries, this year’s index has positioned them in deplorable positions.

As regards the countries that have promised social, political and economic changes, such as Morocco, Algeria, Oman, Jordan and Saudi Arabia, the progress of freedom of journalism still has a long way to go. Morocco (136th) and Algeria (125th) have at least ranked above Oman (141st) and Saudi Arabia (163rd).

In 2012, Syria was the worst country for journalists in that they were denied the right to information and the coverage of the war there. Syria is notorious for its news blackout, a means used by the Assad regime to bar journalists from reporting its crack down of the protests and uprising.

According to the index, political instability is, among other things, a stumbling block to press freedom. Here, threats make it difficult for journalists to independently report news and information to people.