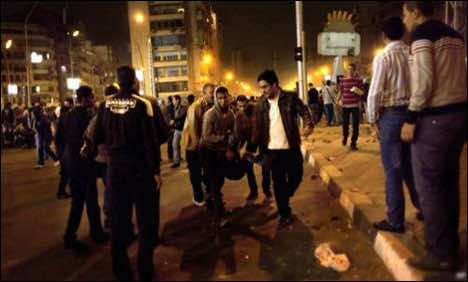 Two more people died in clashes between police and protesters near Cairo’s Tahrir Square earlier this week, the health ministry said Thursday, bringing to 56 the number of deaths nationwide in a week of violence.

The two — a 26-year-old male and another unidentified man — were shot in the head and chest during clashes late on Tuesday night and succumbed to their wounds overnight, health ministry spokesman Ahmed Omar said.

Egypt has been gripped by unrest since rallies last week marking the second anniversary of the uprising that toppled president Hosni Mubarak.

The protests took a violent turn on Saturday after a court sentenced 21 residents of the canal city of Port Said to death for their involvement in football-related violence last year.

Anger on the street has been directed mainly at Islamist President Mohamed Morsi and his Muslim Brotherhood movement who have been accused of monopolising power and failing to reform post-revolt Egypt.