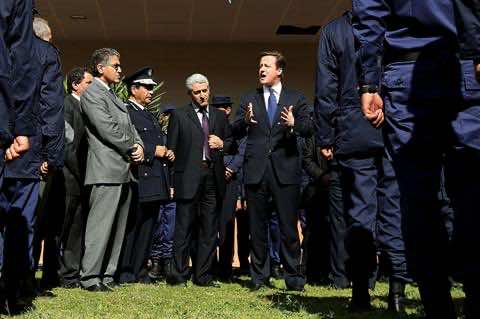 British Prime Minister David Cameron flew into the Libyan capital on Thursday for a previously unannounced visit, an AFP photographer in Tripoli reported.

Cameron, whose visit comes only a few days after Britain warned of threats to its embassy in Tripoli, arrived at Tripoli airport at 11:00 am (1000 GMT), amid tight security.

Accompanied by Libyan Interior Minister Ashur Shwayel, he immediately made his way to a police academy in southern Tripoli, where he attended a ceremony to mark the promotion of officers.

A Libyan government official told AFP that cooperation in the field of security would be at the centre of talks between Cameron and officials in Tripoli.

Downing Street said on Twitter that the British premier travelled to the North Africa country “to discuss how the UK can continue to help build a strong, prosperous, democratic” Libya.

On Thursday, Britain urged its nationals to leave Benghazi immediately because of a “specific and imminent threat to Westerners” in the east Libyan city.

Several other Western nations followed Britain’s lead and told their citizens to pull out, sparking anger from Libya which said the threat had been exaggerated.

On Monday, Britain said it had identified a “potential threat” to its embassy in Tripoli.

Cameron paid a visit to Algeria on Wednesday to strike a new security partnership between the two countries, little more than two weeks after a deadly hostage crisis at a Sahara gas plant.

He is in the region en route to Liberia, where he will co-chair an international development conference on Friday.