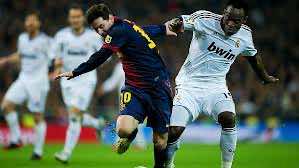 The first Classico in 2013 did not disappoint anybody as it brought all the intensity and the excitement to its fans in the Santiago Bernabeu Stadium.

Real Madrid made clear signs of its ambitions to take the lead since the beginning of the match, with Crisitiano Ronaldo came away from midfield with the ball in a promising opportunity to score the first goal. The Portuguese was stopped by Barça’s defender Gerrard Pique, who committed a foul just on the edge of the area. Ronaldo’s free-kick forced Pinto to show his best.

Barcelona, in its turn, was about to take the lead with a free-kick by Xavi in the 22nd minute which hit the crossbar and heightened the intensity of the game even more.

In the second half, the whites began with the same pressure as the first half. However, it was Barcelona which scored in the 50th minute by Fabregas who beat Diego Lopez in a one on one, leaving the visitors ahead in the game.

Real Madrid’s manager Morinho reacted and brought on Modric for Callejon to refresh the midfield and give an extra support for the forward line.

In the 81st minute, the Frenchman Varane of Real Madrid beat Barça’s goalkeeper Pinto with a header following a corner taking the game to the start once again.

Varane was Madrid’s star all evening, clearing off the line in the first half and making countless other defensive interventions.

The draw score left who’s going to play in the final to be decided at the Camp Nou on February 27.