The 37-year old was presented at a news conference at the French club’s Parc Des Princes stadium on Thursday.

Beckham was reported to have had a medical at La Pitié Salpêtrière where the French club undergoes the medicals for its players.

Beckham has been without a club since he ended a five-and-half year contract in the US last month after winning a second MLS cup with the Los Angeles Galaxy.

The English star said that the salary he’ll receive from his contract with the PSG will go to charity. 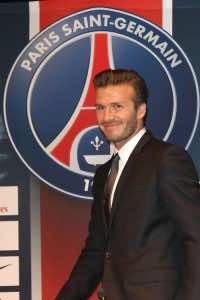 “I’m not going to touch the salary that I will receive from the club in these five months. It will be a donation to a charity with whom the club works. I’m proud of being able to do such thing. I love helping children in difficult situations” said the “Spice Boy.”

David Beckham said during the news conference that he’s excited to play with the other star of the PSG, Swedish Zlatan Ibrahimovic whom he described as a “very special” Player.

“I chose here because I can see what the club are trying to do, the players they’re bringing in,” said Beckham, predicting PSG would have “a lot of success in the next 15 to 20 years”.

The English midfielder will hold number 32 with the French team just as he did with his former team of AC Milan.