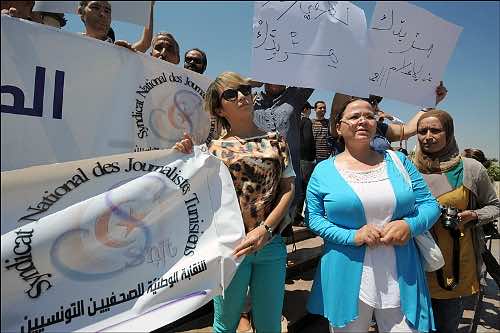 After many years of corruption, dictatorships and censorship, the people of many Arab countries, rebelled and fought to assert their freedom in the so-called Arab Spring. As a result of the uprisings, many oppressive regimes collapsed. After that free and “democratic” elections followed and new people came to power.

Now after the Arab Spring and its blessing one would expect that things would change for the best. However, the annual report of Reporters Without Borders stated something different and drew a sad picture about freedom of press in those countries.

In the case of Tunisia, during the rule of the Ben Ali, the country was ranked 135th in terms of freedom of the press. It is certain that this rank was not very great, but it is a lot better than the ranking of the country after the revolution. Before the revolution the government boldly used police forces to assault journalists and in many cases it aimed to punish the journalists via the judiciary system. Human rights activists always complained of the imprisonment of journalists.

After the revolution the government (which is an Islamist one) is not using police forces, instead it is using a group of ignorant people called the Salafists. Reports have surfaced of more than 30 cases of serious physical attacks against journalists launched by groups of Salafist. The government unusually doesn’t take these attacks seriously, since it considers those who work in media as nothing about “corrupt fellows” who work towards their own agenda.

Freedom of press in Egypt is not faring any better. Since the revolution the ranking of Egypt shifted from 166 before the revolution to 158. In spite of this slight improvement, the report of Reporters Without Reporters points out that the freedom of speech in Egypt “have remained at a deplorable level.” We don’t need to remind ourselves of the massacre President Mursi committed against freedom of expression, freedom of press, as well as the independence of the judiciary system, with his notorious constitutional draft.

The siege of the Media Production City–which was conducted by Muslim Brotherhood as well as Hazimoun movement–represented a great threat to freedom of press in Egypt. Yet the president didn’t make any move to defend journalists.

Instead the authorities helped the offenders build toilets around the city of production so they would feel more comfortable during their siege. One of the leading members of Hazimoun movements justified the siege in the city of media production by saying that “The media must be besieged to stop campaigning against Islam and Islamists.” According to this view, journalists are the enemies of Islam and God and in that case then it will not be strange if we see journalists being whipped in the next few years. One needs only to watch for few minutes the religious channels in Egypt and the campaigns they are launching against journalists. Sometimes journalists are described as being “Foloul” (remnants of the former regime) and many times they are described as the enemies of Islam and the enemies of God.

Personally I think that the only difference the Arab Spring has made is that in the past people were oppressed in the name of law and public order, but now they are arrested in the name of God. There is something that the regimes of the Arab Spring countries need to swallow: Freedom of press is about one package, either you take it all or leave it all. One cannot ask for freedom of press when it is of his interest and ask for censorship when journalists start writing thing he/she doesn’t like.