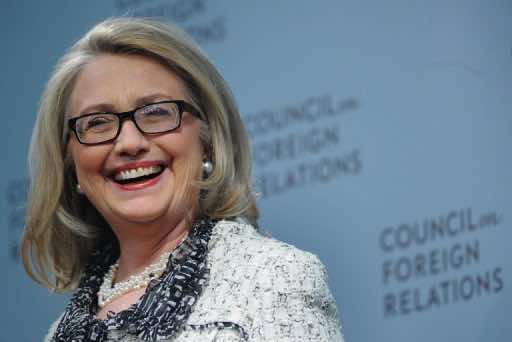 In her final press interview, Clinton told a small group of journalists including AFP that after four years as America’s top diplomat, she was looking forward to getting some rest and taking long walks with her newest dog, a five-month-old labradoodle pup named Maisie.

But in the hour-long roundtable, Clinton also summed up some of the weighty issues that will be weighing down Kerry’s in-tray on Monday morning. Here are some of her thoughts:

“The worst kind of predictions of what could happen, both internally and spilling over the borders of Syria, are certainly within the realm of the possible now,” Clinton warned, calling the “conflict distressing on all fronts.”

She charged that Iran and Russia were both aiding and abetting the regime of Syrian President Bashar al-Assad, with Tehran increasing its support.

“The Iranians have made it clear for some time that keeping Assad in power was one of their highest priorities. We believe they have acted on that by sending in more personnel, not only to help Assad, but to support and advise military security forces,” Clinton said.

“We have reason to believe that the Russians continue to supply financial and military assistance in the form of equipment to Assad.

“The crisis deserves all of the efforts that we can bring to it,” she added, saying she knew Kerry “intends to pick up where I left off.”

Clinton warned that while the United States has “never stopped trying to engage” with Iran over its suspect nuclear program, making numerous approaches to get them back to the negotiating table, time was running out.

“I don’t think the window can remain open for too much longer. I’m not going to put days, weeks or months on it,” she said, though adding that the Iranian leadership was more preoccupied with the upcoming elections.

“This is a front-burner issue of real concern which I think will be on the desk of the secretary when he arrives,” Clinton said, referring to the isolated communist-run state that is threatening to conduct its third nuclear test.

“We thought we were making some headway in dealing with Kim Jong-Il and his administration. Of course he died and was succeeded by a young leader, who we’re still taking stock of along with our partners.”

Clinton pledged to keep the issue of Afghan women “front and center,” revealing for the first time that she will stay on as co-chair for the US-Afghan Women’s Council based at Georgetown University in Washington.

“There is still a set of beliefs that do not permit women to be viewed as full human beings and there is still a lot of violence — some of it family, village related, some of it Taliban originated — that put girls and women at risk,” Clinton said.

So it would be important as US troops withdraw from Afghanistan by the end of 2014 to ensure Washington maintains its support for “those forces within Afghan society who accept that women have to be given their rights and roles,” she added.

“The United States is going to be having to take actions to protect not only our governments but our private sector from this kind of illegal intrusions,” Clinton said, warning such attacks were on the increase.

“There’s a lot that we are working on that will be deployed in the event that we don’t get some kind of international effort under way,” she said, adding she hoped to see an international alliance formed to work on it.

“Because everybody’s vulnerable. It’s not just our institutions.”

“This is an opportunity for us to really bring to the table the North Africans and the sub-Saharan Africans who are affected, the Europeans and the Gulf, to get a much more coordinated planning effort underway so it’s not ad hoc,” Clinton said.

In Mali, “we have a chance to form a coalition that really starts with a set of accepted principles that we can then build on,” she added.