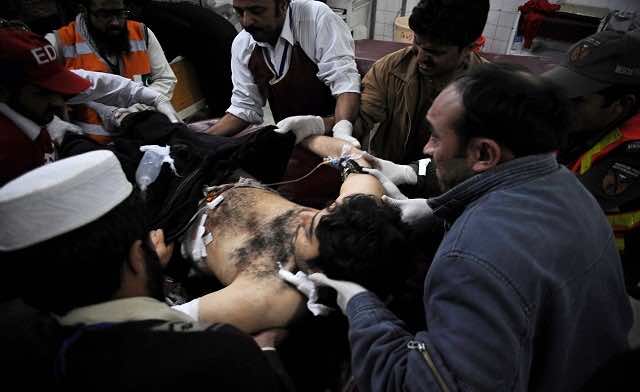 A suicide bomber killed 22 people on Friday in a crowded market outside two mosques from separate Muslim sects in Pakistan’s restive northwest, police and hospital officials said. Two of the dead were policemen.

Forty-eight people were wounded in the attack in a narrow lane in the town of Hangu that houses both a Shi’ite and a Sunni Muslim mosque.

Officials said the anti-Taliban Sunni Supreme Council often holds its meetings in the Sunni mosque, which made it a possible target.

But district police Chief Muhammad Saeed said that the attack was aimed at Shi’ites and that Sunni Muslims were unintended victims.

“Most of the dead were moving in and out of the mosques in the marketplace after Friday prayers when the bomb went off,” senior police officer Imtiaz Shah said.

Hangu, part of Pakistan’s border region with Afghanistan, has been racked by sectarian violence between Sunni and Shi’ite tribes whose mosques, homes and shops are often close to one another.

Hangu is just a few km from Parachinar, which has a significant Shi’ite population against whom hardline Sunni militant groups have launched attacks for years.

No group had claimed responsibility for the attack by late evening.