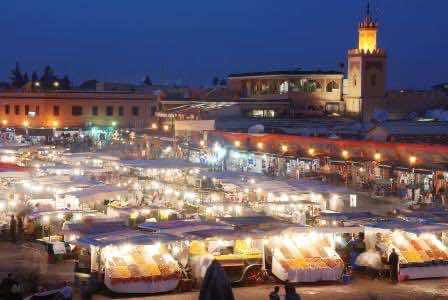 The Moroccan 400 m2 pavilion, one of the largest in the fair, aims to present the tourist attractions of the Kingdom, its ancient culture, its history and its ancient heritage, Mr. Sofi told MAP on the sidelines of FITUR (January 30-February 3), which is considered the second most important tourism fairs in the world.

More than thirty Moroccan businesses are present at this event, including representatives of travel agencies, regional councils of tourism, hospitality industry professionals, said the head of ONMT, adding that the pavilion aims to promote the Kingdom as a tourist destination and attract more Spanish tourists to Morocco.

He said the number of Spanish tourists visiting Morocco rose by 4 percent in 2012 to nearly 800,000 visitors.

To reach the goal of one Million Spanish tourists, Morocco regularly participates in various tourism fairs held in Spain, especially in the regions of Catalonia, the Basque Country and Galicia, to establish contacts with Spanish tourism professionals, he said.

Nearly 9,000 companies representing a hundred countries, including Morocco, will take part in the 33rd International Tourism Fair (FITUR 2013), which will open Wednesday in Madrid.

A total of 8,979 companies from 167 countries and regions all over Spain will participate in this event.