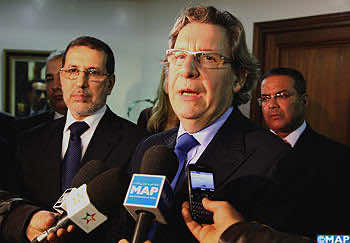 Finding a settlement to the Sahara issue, as part of the Moroccan autonomy plan, will help promote security in the Sahel region and serve the interests of the Maghreb and Europe, said on Friday president of the Morocco-European Union friendship group at the European parliament, Gilles Pargneaux.

“We support the Moroccan plan to grant autonomy to the southern provinces and we wish to endeavor together for the settlement of the Sahara issue in order to promote security in the Sahel, not only for the sake of the Maghreb but also for us Europeans”, Pargneaux, who is leading a group of eurodeputies visiting Morocco, told the press.

Speaking after a meeting with Moroccan minister of foreign affairs and cooperation, Saâd Dine El Otmani, the European MP also stressed the need to build the Arab Maghreb Union, as a step that will contribute to improving and developing relations between countries of the region and the European Union.

He added that in view of the present regional diplomatic and  political context, it is necessary to reopen land borders between Morocco and Algeria and promote ties between the two neighboring countries.

Of his talks with the Moroccan official, he said they reviewed the consequences of the French military action in Mali.

The European MP delegation will also go to Dakhla, southern Morocco, to reiterate their support to the Moroccan autonomy initiative.