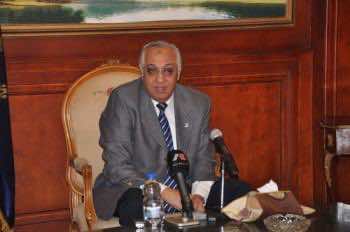 Egypt’s opposition on Saturday called for Interior Minister Mohammed Ibrahim to resign after security forces were seen on television beating and dragging a naked man at a Cairo protest.

“The horrible and degrading images showing the central security officers and police beating and dragging a naked man near the presidential palace should lead to the interior minister’s immediate resignation,” said Khaled Dawoud, spokesman for the National Salvation Front (NSF).

Such a case “cannot be resolved by a simple apology from the minister,” he said.

Footage of the incident was broadcast live on television during protests on Friday night against Islamist President Mohamed Morsi.

It has since gone viral on the Internet, triggering an outpouring of condemnation on social media websites.

In the video, riot police can be seen using truncheons to beat a man in his 50s before he was dragged on board an armoured vehicle in front of the presidential palace.

The NSF is to meet later on Saturday to review its strategy after a night of clashes between security forces and petrol-bomb throwing protesters that killed one man and injured dozens.

The interior minister has ordered an investigation to “hold accountable” the policemen who beat the naked protester, his office said.

People had taken to the streets in several cities in response to an NSF call for a show of opposition to Morsi and his Muslim Brotherhood after deadly unrest swept Egypt last week in the worst violence since Morsi was elected in June.