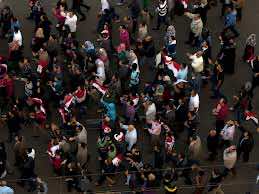 Egypt’s presidency said on Saturday it was “pained by the shocking footage” of police beating a naked man during overnight clashes outside the presidential palace that has outraged the opposition.

“The presidency was pained by the shocking footage of some policemen treating a protester in a manner that does not accord with human dignity and human rights,” it said in a statement.

“The presidency affirms its and all state institutions’ solicitude to implement what is contained in the Egyptian constitution on guarantees to citizens that ban torture, or terrifying and harming citizens mentally or physically,” it said.

But the presidency added that the footage, in which police are seen dragging and beating a naked man to an armoured vehicle, reflected “an isolated act.”