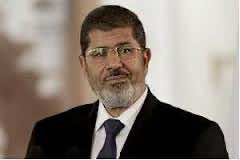 Egypt’s main opposition group, the National Salvation Front, said on Saturday it “completely sides with” calls to topple the ruling Islamists and called for President Mohamed Morsi to be tried for “crimes of killing and torture.”

“The Salvation Front completely sides with the people and its active forces’ calls to topple the authoritarian regime and the Muslim Brotherhood’s control,” it said, calling on Egyptians to protest peacefully. The coalition, led by Nobel Laureate Mohamed ElBaradei and former Arab League chief and presidential candidate chief Amr Mussa, called for “all those
responsible for killings and torture and illegal detention to be fairly tried, starting with the president.”

It ruled out dialogue with the presidency “before the bloodletting ends and those responsible for it are held accountable,” and before its demands are met.