Fez - They tell their stories regretfully with tears trickling down and lumps in throats. Each one of them has a different story of how he or she first was tempted to use it. And gradually they found themselves deep in the abyss in the point of no return. The beginnings of their stories are different in small details but they have almost always the same ending: loss, illnesses, crime and drastic poverty. The reality of heroin use in Morocco is really alarming. Reports about the phenomenon say that the Northern cities of the country are swept over by heroin and the number of addicts is increasing day in day out. 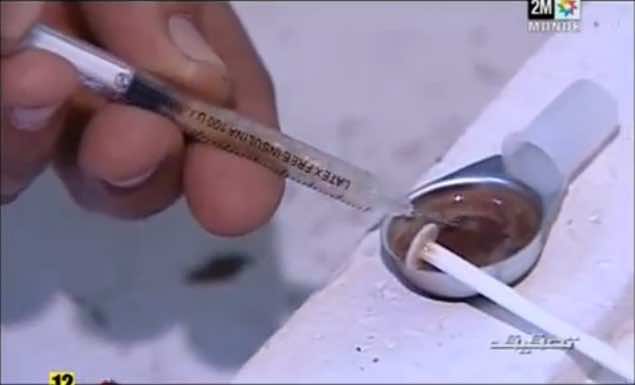 Fez – They tell their stories regretfully with tears trickling down and lumps in throats. Each one of them has a different story of how he or she first was tempted to use it. And gradually they found themselves deep in the abyss in the point of no return. The beginnings of their stories are different in small details but they have almost always the same ending: loss, illnesses, crime and drastic poverty. The reality of heroin use in Morocco is really alarming. Reports about the phenomenon say that the Northern cities of the country are swept over by heroin and the number of addicts is increasing day in day out.

In 2008, Aljazeera news channel made a report on heroin addiction in the north of Morocco “where all the roads lead to the world of drugs.” The report says that the poison seeps into Morocco through the Spanish-occupied town of Ceuta which is close to Tangier and Tetouan. The widespread of heroin among the youth is attributed to its cheap price in the market in comparison to Cocaine and Hashish. According to the report, the price of one roll is about $3 and so can be bought by everyone. “My advice would be not to take it; it is the most dangerous drug. The things it will lead you to are death, hospital or prison” and addict says.

On January 24th, 2013, the Moroccan 2M TV channel broadcasted a very instructive program on heavy drug use in Morocco which tried to answer different questions about the phenomenon. What are the causes leading people to take this deadly poison? Is it an escape from reality or a rebellion against it? How does this drug turn humans into ghosts bereft of self-will and equilibrium? What are the ages of those enticed by this poison into its vicious and infernal circle? What are the possible means for the treatment of those who have fallen into the trap of addiction?

The people interviewed by Mohammed Khatim, the producer of the program, were heroin addicts, doctors, psychiatrists, and NGO activists. Some of the addicts were well-to-do people and had high social positions before they fell in the trap of addiction.

Telling his story, one of those who slipped into the maze of addiction remorsefully says:

“I immigrated to Europe at the age of seventeen but there I led a life of problems and fun-seeking until I started taking heroin. After two years and eight months I was arrested to be sent back home again! I lived outside the house for some time because I had some savings but once I run out of money I went home. My parents didn’t reject me because I am their only son! They helped me and stood by my side until I started a new life and got a job but soon I went back to heroin!”

The man who speaks in a choked voice and sheds hot tears on his lost life lives in the ruins outside the city of Tangier and spends his days, rather his life, in constant search for money by whatever means possible to afford his daily doses of heroin.

Another similar case is that of a woman who had her own house and car and cherished a clean respectful life, but somehow she got caught between the claws of addiction. She says:

“One day I met a man, and that day was the worst day in my life. That man was the one who introduced me to heroin. I followed him in a path that was enticing at first, but after some time I found myself pregnant. I continued taking drugs and I didn’t start thinking rationally until the last stages of my pregnancy: my money squandered, my house sold, my car, my jewellery! I became nothing.”

The cases interviewed all lead an infernal life torn between the forlorn desire to give up the vice of addiction and the search for the daily dose! Some of the addicts have managed to surmount their addiction thanks to the help provided by Hasnouna Association for the Treatment of Addiction in Tangier.

Doctor Mohammed Es-Salhi, a psychiatrist and the president of Hasnouna center, tells us that heroin addiction can be treated completely by Methadone, which is a pain reliever medicine that is also widely used for the treatment of heroin addiction. Hasnouna addiction treatment center provides regular doses of Methadone for its patients during nine months of treatment but the efforts of this leading center remains limited and insufficient.

Doctor Es-Salhi says in this regard: “We have seven hundred addicts in the waiting list which is now closed so as not to give a false hope to the addicts who will have to wait years for their turn to come. In the center we have two thousands and eight hundred files of real addicts now!”

Doctor Fatima Aswab, the president of Mental Health office in the Ministry of Health says: “Of course we cannot provide treatment for all heroin addicts. We started with a program in 2010 and established treatment centers in Casablanca, Rabat and Tangier, but the problem that we have is the shortage in specialized human resources.”

The epidemic of heroin addiction in Morocco is an issue that concerns us all; government, civil society and individuals. The need for a national campaign to fight drug use and raise awareness and consciousness against this epidemic is very urgent today, especially that the number of young victims is skyrocketing as national and international statistics say.