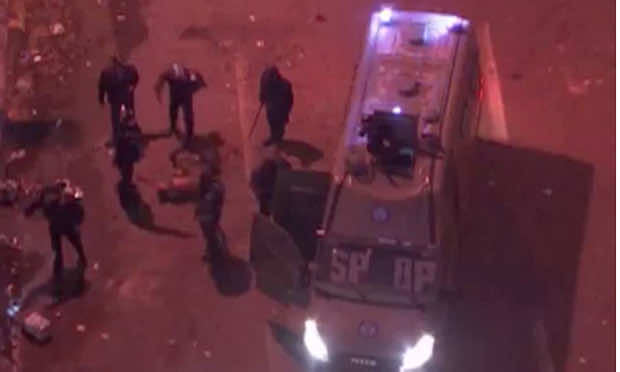 A video footage of a man beaten and dragged  naked by policemen in Cairo triggered an outrage in Egypt on Saturday and
prompted calls for Interior Minister Mohammed Ibrahim to resign.  But hours after the presidency expressed disappointment over the incident and Ibrahim offered to resign, the man told state television the policemen  were actually trying to save him from protesters — a claim quickly dismissed  by his relatives.

Footage of the incident was broadcast live on television during protests on Friday night against Islamist President Mohamed Morsi. It has since gone viral on the Internet, triggering an outpouring of condemnation on social media websites. In the video, riot police can be seen beating a man in his 50s before he  was dragged into an armoured vehicle in front of the presidential palace.

“The horrible and degrading images showing the central security officers and police beating and dragging a naked man near the presidential palace should lead to the interior minister’s immediate resignation,” said Khaled Dawoud, spokesman for the main opposition National Salvation Front (NSF).

The presidency said it was “pained by the shocking footage of some policemen treating a protester in a manner that does not accord with human dignity and human rights.” It would follow the interior ministry’s investigation of what it called an “isolated act.”

Ibrahim’s office said he had ordered a probe to “hold accountable” those who who beat the man, and that he would resign if “that’s what the people want.” Prosecutors say Saber, a 50-year-old construction painter sent to a police
hospital, was found carrying petrol bombs.

Late on Saturday, Saber, in an interview with state television, said the police were actually saving him from protesters. “They gathered around me and roughed me up. They took my clothes then they said ‘hey, this guy isn’t a policeman, he’s an old man,'” Saber said from his hospital bed.

Then, he said, “I tried to resist the police because I didn’t want to get  into their armoured vehicle, but then I realised that they were trying to save me.”

But minutes after his interview, relatives dismissed his claim. “He’s lying, he is scared,” his daughter, Randa, told state television. And an unnamed man claiming to be Saber’s nephew said he “is lying because there is lot of pressure on him.”

On Friday night people had taken to the streets in several cities in response to an NSF call for a show of opposition to Morsi and his Muslim Brotherhood after deadly unrest swept Egypt last week in the worst violence
since the president was elected in June.  Hours before Friday’s violence erupted, NSF leader Mohamed ElBaradei had
suggested unrest would persist if Morsi kept sidelining his opponents.