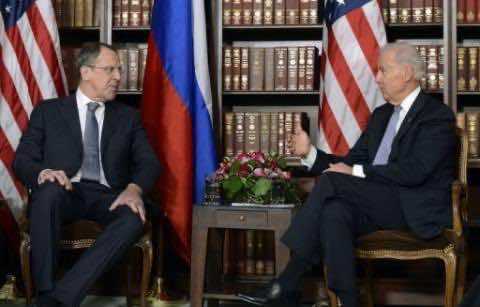 Russian Foreign Minister Sergei Lavrov held his first direct talks with Syria’s opposition leader in Germany on Saturday, amid a renewed global push to iron out sharp differences over how to end the conflict in Syria.

The meeting did not include US Vice President Joe Biden or UN-Arab League envoy Lakhdar Brahimi, Russian news agencies said, despite initial suggestions that four-way talks might be held as all four are in Germany for the high-level Munich Security Conference.

The reports, quoting a diplomatic source, did not give details about what Lavrov and Moaz al-Khatib discussed in their brief meeting.

The rare talks came after Biden told the conference that the United States was pushing to help strengthen the opposition, insisting Syria’s embattled President Bashar al-Assad was a “tyrant” and must go.

Biden said it was “no secret” that Moscow and Washington have “serious differences” on issues like Syria, as fears mount that the 23-month conflict will draw in neighbouring states.

“We can all agree… on the increasingly desperate plight of the Syrian people and the responsibility of the international community to address that plight,” he added.

The United States and its allies have made repeated calls for Assad’s ouster, while key Damascus ally Russia has resisted any international action.

Biden was to hold separate meetings with Lavrov, Khatib and Brahimi on the sidelines of the weekend conference.

Lavrov, whose country has blocked three UN Security Council resolutions sanctioning Assad for the violence, called for another meeting of the Syrian action group led by Brahimi in a bid to find an accord on a transition, saying he believed progress was possible.

On Friday, Brahimi called for a “clear decision” from the UN Security Council to set the agenda for a peaceful solution.

“One has to have some kind of hope, but… I am much more conscious of the difficulties, of the country being broken day after day than I am of a solution,” Brahimi said in Munich.

On Friday, National Coalition chief Khatib said the international community must not be a “bystander” to the “tragedy” of the Syrian people and reiterated his willingness to talk to the regime.

“As a gesture of good will… we are ready to sit at the negotiating table with the regime but we don’t want their hands to be full of blood,” he said calling for the release of detainees.

Khatib called for “some kind of electronic interference” to stop regime aircraft shelling the Syrian people.

“If that doesn’t work I would demand to destroy the planes and weapons of the Syrian regime,” he said, nearly two years into a conflict the United Nations says has killed more than 60,000 people.

Officials in Washington have said Iran is boosting its support for its key ally Assad, and that Moscow is still arming his regime.

The Assad regime threatened to retaliate over the raid while Tehran warned it would have “grave consequences”.

Israel has not commented on the reports, but a US official said an Israeli raid struck surface-to-air missiles and a nearby military complex on the capital’s outskirts.

“There were surface-to-air missiles on vehicles” targeted by the Israeli warplanes, the official told AFP on condition of anonymity, saying they were believed to be Russian-made anti-aircraft missiles.

Israel has frequently warned that if Syrian chemical weapons fall into the hands of the Shiite movement Hezbollah, its arch-foe and close Damascus ally, this would be a casus belli.

US Defence Secretary Leon Panetta told AFP that Washington is also concerned the “chaos” in Syria could allow Hezbollah to obtain sophisticated weaponry.

On the ground on Saturday, rebels were reported to have taken control of the Sheikh Said district of Aleppo, Syria’s second city, in a strategic victory securing a key route to its international airport.

The Syrian Observatory for Human Rights, which relies on activists and medics on the ground for its information, said at least 85 people were killed on Friday — 32 soldiers, 31 rebels and 22 civilians.