Sidi Ifni, Morocco - In an attempt to draw the Moroccan government's attention to the continuous sufferings of married minors, hundreds of women recently took to the street in Rabat protesting on behalf of their dignity. 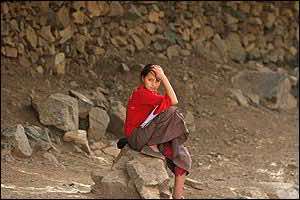 Sidi Ifni, Morocco – In an attempt to draw the Moroccan government’s attention to the continuous sufferings of married minors, hundreds of women recently took to the street in Rabat protesting on behalf of their dignity.

The demonstrators raised banners deigning all forms of violence against women in Morocco.

In this regard, human rights associations visted Siham, a married teenage girl who was ill treated by her husband in Kenitra.

They also visited another badly-treated victim in Sale near the capital Rabat.

One girl, who was married when she was 16 years old told her stories of early marriage, to Najia Adib, head of “Don’t touch my Children” association.

The teenager, who was forced to accept her marriage, found herself in a hellish situation, as she was both ill-treated by her husband and her mother-in-law, who bullied her.

“Unfortunately, Siham’s husband who is supposed to offer security, protection and care at home has turned into a monstrous partner,” Najia explained after lending ears to Siham’s story.

Channel France 24 reported on the issue, showing that more and more victims of early marriages are frequenting domestic violence centers. Among the ramifications of this phenomenon are early divorce and shaky family ties.

Whereas some women, in remote villages in particular, advocate early marriage, saying that it is the only way to settle down, start a family and escape spinsterhood, other educated women have stressed that early marriage begets exploitation and misery.

Fearing the disrepute that the loss of virginity brings about is also among the reasons that push some conservative families to allow their daughters to marry at a very young age.

“Staying at home, unmarried, is associated with shame in our community,” some young girls say.

Fatima Maghnaoui, head of “SOS,” a center for helping victims of domestic violence, pointed out that “most of the girls that fall prey to early marriage come from the countryside and shanty towns.” Poverty and social problems equally account for the rise of the phenomenon,” Maghnaoui added.

“Judges, parents, the husband must all assume responsibility for the calamity that befalls these innocent girls,” Najia Adibe told France 24.

Nezha Al Alaoui, a lawyer and a rights activist, went further to explain that “any age under 18 for marriage is against the law.”

The latest statistics regarding the number of marriages in Morocco show that 12% of unions involved girls who are minors.

The Moroccan law prohibits the marriage of girls under 18 years of age, except in a number of specific cases which must be determined by a judge. But as was pointed by the report, what was supposed to be an exception, has turned into a rule.

Here, it is worth mentioning that nearly all rights activists insist that an end must be put to early-age marriage in Morocco, particularly that the culminations, such as mother mortality and insecure futures for newborns, hurt Moroccan society at large.