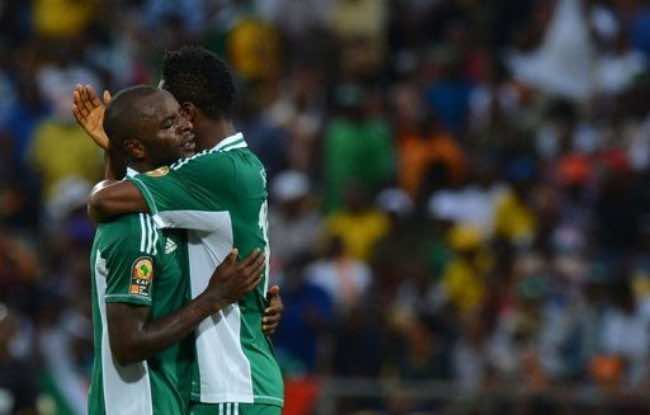 Supposed underdogs Nigeria downed favourites Ivory Coast 2-1 here on Sunday in an absorbing Africa Cup of Nations quarter-final to set up a last-four meeting with Mali.

Mba’s strike brought the curtain down on Didier Drogba’s Nations Cup career, sending the African legend home without the title he and his teammates craved.

“I want to thank God for this wonderful victory, and sincerely thank my players for everything they did today. I hope we can keep going to the final,” said Nigeria coach Stephen Keshi.

“Ivory Coast are the top team on the continent with lots of quality, so we tried to speed up and try to catch out players like Drogba and Yaya Toure.

“I’m glad my team is progressing in every game — there is great discipline in the team and I just hope we keep going that way.

“The boys showed character. When I played for Nigeria I had to fight, fight, fight and they did that today.

“When the Ivorians levelled we tried to defend and work out our tactics, and we scored again. Sunday came up with a beautiful, beautiful goal.”

The 34-year-old Drogba, who was dropped to the bench in the Elephants’ second group game, led the Ivorians at the expense of Anzhi Makhachkala striker Lacina Traore.

For Nigeria, midfielder Fedor Ogude was suspended, with goalkeeper Vincent Enyeama wearing the captain’s armband as its normal owner, veteran defender Jospeh Yobo, struggling with an injury, was on the bench.

A lively start saw Victor Moses test Barry with a venomous shot on 10 minutes, the Ivorian keeper punching the danger away with the palms of his hands.

Two-time former champions Nigeria were giving as good as they got against the top-ranked team on the continent.

With a handful of English Premier League stars on show, the colourful 20,000 crowd could have been forgiven for thinking they were at the Emirates or Stamford Bridge rather than the Royal Bafokeng Sports Palace.

Chelsea old boy Drogba had his first real chance after the half hour, neatly controlling a high ball from the left only for his shot to take a deflection.

Then, two minutes from the break, Nigeria took command, Emineke’s superbly struck right-foot 25-yard free-kick flying through the Ivorian wall and past the head of the motionless Barry.

The Spartak Moscow attacker’s third of the tournament, putting him joint top of the 2013 scoring charts, was no more than the Super Eagles deserved.

With coach Sabri Lamouchi watching stony-faced from the dug out, Ivory Coast levelled on 50 minutes when Drogba swung in a free-kick from the left for Newcastle’s Tiote to head in at the far post for his first goal for his country.

It was game on again for the Elephants.

Moses then flashed in a corner but Barry kept out Brown Ideye’s header, the keeper cradling the ball as he would a baby.

Down at the other end, Enyeama produced a first-class save to deny Toure.

An absorbing encounter between two titans of African football was living up to its headline billing.

But with the clock ticking towards extra time, Mba, advertising the intelligence his surname suggests, weaved his way through the Ivorian defence to put Nigeria into the semi-finals, his 20-yard shot taking a deflection on the way.