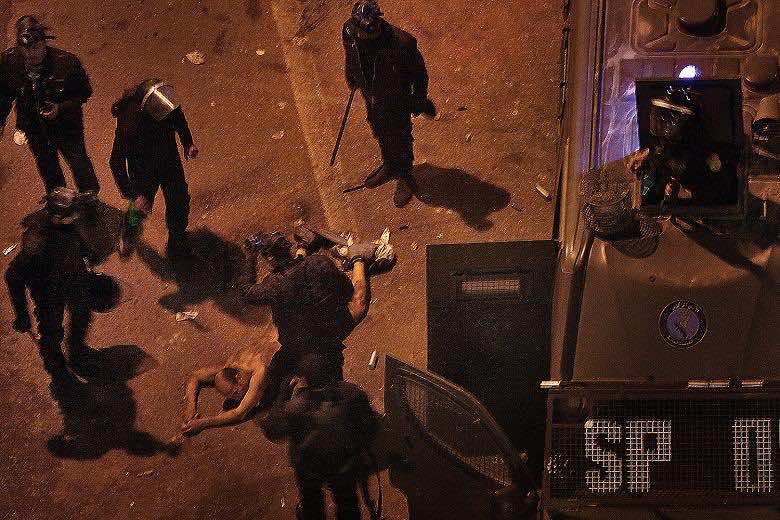 A man whose beating was broadcast on live television, enraging the Egyptian opposition, on Sunday blamed police for the abuse after initially having claimed they saved him from protesters.

The presidency described the footage of police dragging and abusing the naked man during deadly clashes outside the presidential palace on Friday as “shocking” and prompted the interior ministry to order a rare investigation.

But in a series of twists since, 50-year-old Hamada Saber first insisted in interviews from his prison hospital bed that police had saved him from protesters who beat and stripped him.

Saber then changed his account, which was bitterly contested by relatives who said he was being coerced, when prosecutors showed him the video footage, the official MENA news agency reported.

The footage confronted Islamist President Mohamed Morsi, whose movement was banned under ousted leader Hosni Mubarak, with uncomfortable parallels with the old regime.

His office said it deplored the incident but described it as an “isolated act.”

It also outraged  Morsi’s critics who compared the incident with police abuses under Mubarak.

Two people were killed in clashes on Friday, including a man who succumbed to gunshot injuries on Sunday, a hospital official said.

Protesters again clashed sporadically with police outside the palace overnight on Saturday, without reports of casualties.

One of the protesters said they were there to pay homage to a young man killed on Friday, and they chanted “Leave!” and “The people want the regime to fall!” — slogans used two years earlier during the uprising that overthrew Mubarak.

The main opposition National Salvation Front (NSF) has called for the resignation of Interior Minister Mohammed Ibrahim over Saber’s beating.

The beating was “an inhumane spectacle… no less ugly than the killings of martyrs, which is considered a continuation of the security force’s programme of excessive force,” the opposition bloc said.

Ibrahim ordered a probe into the incident and said he would resign if “that’s what the people want,” his office said.

Clashes over the past week have widened the gap between the presidency and the opposition.

The Freedom and Justice and Party, political arm of the Muslim Brotherhood movement from which Morsi hails, accused the NSF, led by failed presidential candidates, of trying to take the presidency by force.

“Being a witness to violence and the armed militias of the NSF, people now know the assailants are trying to take over the presidency by force after being defeated in the vote,” wrote a commentator in the party’s newspaper.

Egypt’s top court the Supreme Constitutional Court on Sunday postponed until March 3 a ruling on the legality of the Islamist-dominated commission that drafted a contested new constitution for Egypt, state media reported.

The legality of the panel that drafted the constitution is at the heart of Egypts worst political crisis since Mubarak’s overthrow.

The charter has divided Egypt, pitting Morsi and his backers against the opposition which includes secularists, leftists and Christians as well as Muslims.

Since the start of the new wave of violence on January 24, the eve of the second anniversary of the country’s 2011 uprising, nearly 60 people have now been killed.