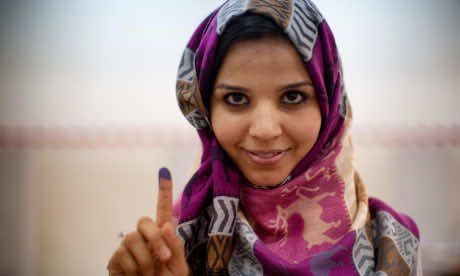 Two years after the start of the uprising that ousted Moamer Kadhafi, Libya’s new rulers are under attack for lack of reforms and face protests on February 15 being touted by some as a “second revolution”.

Faced with growing rumblings in the street, the authorities have put security forces on high alert ahead of the protests as well as celebrations two days later marking the second anniversary of the “February 17 Revolution” that led to Kadhafi’s ouster and being killed in October 2011.

Demands by opposition groups range from a ban on officials of the former regime from holding public office to the disbandment of armed militias and a reform of the higher education system.

Chants at protests are increasingly resembling those staged during the uprising against Kadhafi: “The people demand the fall of the (new) regime.”

A leaflet circulated in Tripoli calls for a “popular revolt” and a civil disobedience movement to bring down the regime.

It encourages Libyans to stock up with food and fuel in anticipation of what it says will be a complete shutdown of the country following the February 15 protests.

It is unclear who is behind the leaflet and the calls for protests but Libyan officials and several organisations, including Islamic groups, accuse remnants of the former regime of fomenting protests to “sow disorder and instability”.

In Libya’s eastern city of Benghazi — cradle of the anti-Kadhafi rebellion — the calls have been relayed on social networks by several groups backed by supporters of federalism and various civil society groups.

“The calls to demonstrate are justified because of several accumulated problems, such as inflation, the high cost of living and high unemployment among the youth,” Mohamed al-Mufti, a former political prisoner under Kadhafi’s regime, told AFP.

“This movement is also politically motivated given their demands for federalism and the challenges posed to the decisions and choices of the assembly and the government.”

Zahia Attia, a political activist, said he “would stage a sit-in and organise peaceful protest marches to denounce the national assembly for its failure to make progress on issues like national reconciliation, allocation of resources … and drafting of a constitution.”

The new Libyan authorities, meanwhile, are trying to learn from incidents in neighbouring Egypt, where deadly riots erupted last month around celebrations there marking second anniversary of the start of the revolution that ousted former president Hosni Mubarak.

Libyan authorities have held several meetings to organise festivities planned for February 17 and to step up security ahead of the February 15 demonstrations.

Libya’s Interior Minister Ashur Shwayel expressed his fears “that the protests of February 15 may not be peaceful in nature,” but insisted that “every citizen had a right to express his political opinion”.

Libya’s mufti, the highest religious authority, has also urged that demonstrations be held in a peaceful manner.

Amor Bushala, a member of an organisation of civil groups, said his organisation would participate in February 15 demonstrations “only if they are
peaceful.”

“Appeals must focus on correcting the process of revolution and not challenge the national assembly or the government which are legitimate institutions,” he said.

Users of social networks such as Facebook have resisted calls to protest against the government and national assembly, insisting that “these institutions are legitimate and there is no reason to dispute them.”

Hadj Ahmed Muldi, a computer technician, however said more and Libyans were becoming excited by the calls for protest.

“Sixteen months after the fall of Kadhafi, there is no change and (the new) government has failed to establish security or restore the authority of the state,” lamented the 54-year-old resident of Tripoli.