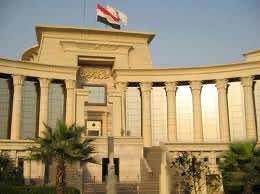 An Egyptian court on Monday sentenced two Coptic Christians to three years in prison for seizing a soldier’s rifle during a deadly October 2011 crackdown on Coptic protesters, a judicial source said.

The Cairo court said Maikel Adel Nagib Farag and Medhat Shaker stole a soldier’s assault rifle during the crackdown on an October 9 protest in which more than 20 demonstrators were killed.

The Copts had been protesting outside state television headquarters in Cairo against an arson attack on a church when soldiers tried to disperse them, leading to clashes in which soldiers shot and crushed protesters with armoured cars.

The military, then in power, was reported in the Egyptian press to have convicted and jailed three of its soldiers for manslaughter during the incident, although it has not confirmed the sentences.

The military said an undisclosed number of its soldiers were killed in the clashes.

Copts suffered a spike in sectarian attacks during the military-led transition between an uprising that overthrew president Hosni Mubarak in February 2011 and the June 2012 election of Islamist leader Mohamed Morsi as his successor.

The October 9 clashes were especially shocking to the minority, which comprises six to 10 percent of Egypt’s 83 million people, because it involved soldiers and not sectarian elements.