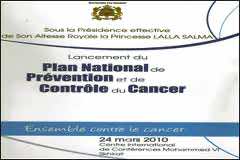 Cancer incidence in Morocco is estimated at around 110 new cases for every 100,000 inhabitants annually, said Prof. Abdellatif Ben Ider, head of the oncology department at the Casablanca university hospital.

Talking to radio station “Medi 1” on the occasion of the world cancer day, the specialist noted that 30.000 new cancer cases are diagnosed every year nationwide.

He went that the Lalla Salma association for the fight against cancer has a national plan that consists in opening centers for the early diagnosis of gyneacologic and mammal cancers.

These centers, he said, also handle cancer cases from diagnosis to treatment, whether it is surgery, chemotherapy or radiotherapy.

The World Health Organization said 8 million people die every year from cancer, due to tobacco use and bad food habits.

The number will reach 11 million people annually in 2030.