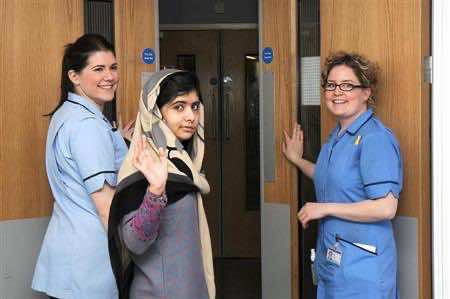 Malala Yousufzai, the pakistani schoolgirl who was shot in the head by taliban militants because she promoted girls’ right for education, made her first video statement since she was nearly killed and said on Monday that she would keep up the same campaign that led to her attack, according to the Associated Press.

The 15-year-old said she is “getting better, day by day” after two operations that were completed on Saturday in the Birmingham’s Queen Elizabeth Hospital, to reconstruct her damaged skull and restore the hearing in her left ear.

Malala was shot on Oct.9 when she was on her way home from school in northwestern Pakistan. The Taliban said they targeted her because she was promoting “western thinking“ and girls’ education and dared to criticize the Islamist group’s behavior when it took over the scenic Swat Valley where she lived.

The teen was airlifted to Britain from Pakistan to receive medical care and protection against further Taliban threats.

The shooting drew the world’s attention and sparked outrage in Pakistan and many other countries around the world.

Malala’s story has captured global attention for the struggle for women’s rights in Pakistan.

As a sign of her impact, Malala made the shortlist for Time magazine’s “Person of the year” for 2012.

“I want to serve. I want to serve the people. I want every girl, every child, to be educated, for that reason, we have organized the Malala Fund”, said Malala in the video.

The Malala fund is a girl’s education charity set up in late 2012 with a 10 million dollars donation from Pakistan.