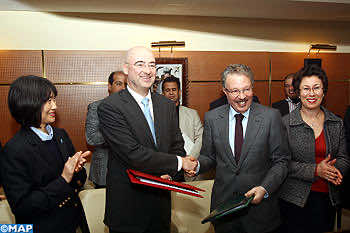 The High Commission for Planning (HCP) and seven UN specialized bodies signed, Monday in Rabat, a partnership agreement with the aim to capitalize on the achievements of the Millennium Development Goals (MDGs) in Morocco in terms of monitoring and reporting.

This agreement was signed by High Commissioner for Planning, Ahmed Lahlimi Alami, and the Resident Coordinator of the UN System in Morocco, Bruno Pouezat on behalf of seven UN bodies, including UNDP, UNFPA, WHO, UN women, UNAIDS, UNICEF, and ECA.

The partnership is based on a process of capacity building and networking of different socio-economic actors in order to ensure the sustainability and institutionalization of the reporting system, while strengthening the advocacy and communication components as a tool to support decision making and strategic planning.

The High Commissioner for Planning said on this occasion that under this partnership, Morocco  will lead a territorial approach which aims at strengthening and involving local and regional stakeholders in order to effectively contribute to the efforts of  decentralization and regionalization launched by Morocco.

“The HCP is committed to developing a great partnership with the UN that will not only highlight the achievements but which will also open up prospects for 2015 and beyond,” said Lahlimi on the sidelines of the signing ceremony.

Lahlimi called on the UN system to take into account a number of socio-economic indicators that can effectively assess the current and future development of the various nations and prevent the outbreak of crises.

For its part, Resident Coordinator of the United Nations system in Morocco stressed that this new partnership reflects “the commitment and the strong determination of the kingdom” to implement the MDGs.

This agreement will help to better prepare reports on development in Morocco for a better visibility of the progress achieved in the Kingdom, which will encourage them to conduct similar experiments in other countries, he said.

The program will be conducted within the framework of a collaboration between the HCP, the departments concerned, UN agencies, and civil society.