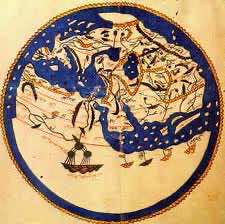 Geography is generally defined as the science that seeks to understand the planet earth and its human and natural complexities. It is, in fact, an interdisciplinary science as it intersects with cartography, toponymy, cartology, physical science, environmental science etc. Thus, modern geography has benefited considerably from the huge progress in these and other sciences. The contribution of Muslim geographers to the sciences of geography and cartography during the Middle Ages is acknowledged by many geographers today. This original contribution amounted to hundreds of maps, diagrams, descriptive books and treatises. One of those greatest Muslim geographers and map-makers was Charif Al-Idrisi.

Abu Abd Allah Muhammad al-Idrisi al-Qurtubi al-Hasani al-Sabti, usually called Charif Al-Idrissi, was a Moroccan geographer, cartographer, traveler, scientist, and Egyptologist. He was born in Sabtah (Ceuta) in 1100. He studied in Cordoba, lived in Marrakech for some time and then devoted his youth to travel in North Africa, Asia and Europe.  Al-Idrisi traced his descent to the Idrisids[1] and through them to the prophet Moahmmed (pbuh). Modern historians consider Al-Idrisi the greatest medieval Arab geographer.

Al-Idrisi built his geographical achievements on his Greek and Arab predecessors but what distinguishes him is that he didn’t follow or copy them; instead, he corrected them to produce the most accurate map in medieval times. The map was called the planisphere and it is a representation of Europe, North Africa, and Western Asia.  Around the year 1145, Al-Idrisi entered an unusual partnership with King Roger II of Sicily; a partnership that was not typical of Muslim scientists of equal worth and reputation! Some references say that Al-Idrisi accepted to live with and work for Roger II in order to escape persecution by the Caliphs! Some went even far to brand him as a renegade, but the truth is that he remained a Muslim until his death.

Al-Idrisi wrote many treaties on different disciplines but as far as geography is concerned he had one major work that is considered the greatest of all medieval geographical treaties; namely, Almushtaq fi ikhtiraq al-afaq (The Pleasure of Him Who Longs to Cross the Horizons) which was translated into Latin, French and other European languages. He died in 1165 in Sicily and probably in his birthplace Ceuta as information is so scarce about his last days.

Hajj or Muslim pilgrimage to Mecca gathered Muslims from all over the world and enabled them not only to fulfill the fifth pillar of Islam but also to meet and exchange geographical information on what they see and come across on their way to Mecca. This inspired Muslims to travel and discover the entire world (except the Americas), especially after they assembled considerable knowledge about areas from the Pacific to the Atlantic. The achievements of Muslim travelers and geographers were very instrumental to many subsequent famous travelers. “It is in fact with the help of Muslim geographers that Magellan crossed the Cape of Good Hope into the Indian Ocean. Even Columbus made use of their knowledge in his discovery of America,”[2] Hamid Naseem Rafiabadi says.

In a nutshell, Muslim scholars and scientists excelled in a number of areas and produced substantial scientific knowledge in geography and in various other fields of study. Therefore, as A. Buttimer, and L. Wallin say,  “to ignore , as did some writers, the contribution of Muslims to geography during the Middle Ages, and to claim that the European Renaissance developed independently of what was happening in the Islamic World, is to dismiss seven centuries of Muslim leadership of world culture.”[3]

[1] Idrisids are traditionally regarded as the founders of the Moroccan state.