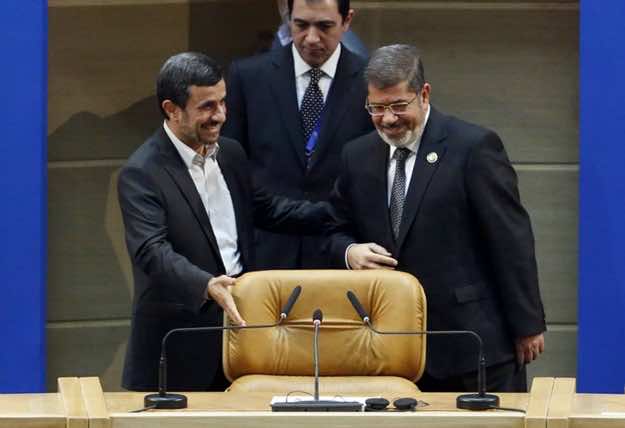 Iranian President Mahmoud Ahmadinejad left Tehran on Tuesday for the first visit to Egypt by an Iranian head of state since Iran’s 1979 Islamic revolution, promising to work towards strengthening bilateral ties.

Ahmadinejad during the three-day visit will attend an Organisation of Islamic Cooperation conference in Cairo as well as meet with Egyptian officials and politicians, the official IRNA news agency reported.

“I will try to pave the ground for developing cooperation between Iran and Egypt,” Ahmadinejad told reporters before leaving Tehran.

Egypt has responded cautiously to Iranian efforts to revive ties since Islamist President Mohamed Morsi took power in 2012, with the two nations adopting opposing positions on the Syrian conflict.

Iran supports the regime of Syrian President Bashar al-Assad, while Egypt has been a leading voice in urging his departure — along with regional heavyweights Saudi Arabia, Turkey and Qatar.

“If Tehran and Cairo see more eye to eye on regional and international issues, many (issues) will change,” Ahmadinejad was quoted by IRNA as saying.

Tehran severed ties with Cairo in 1980 in protest at a peace agreement between Egypt and Israel by then Egyptian president Anwar Sadat.