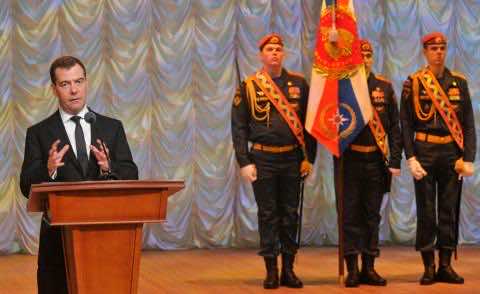 A slick documentary film has mysteriously emerged on the Russian Internet where former ambassadors, an ex-general and even an ex-prime minister line up to accuse Dmitry Medvedev of betraying Russia’s interests while he served as president.

It is unclear who could be behind the anonymous but professionally-shot film accusing Medvedev of treason over the NATO-led air campaign in Libya, or if the movie has high-level backing.

But its aim is clear — to damage the public standing of a man who served four years as president and now works as prime minister under his mentor President Vladimir Putin.

The film is the second such bid to tarnish Medvedev’s reputation in recent months. In the summer, an equally mysterious documentary accused him of procrastinating over using force against Georgia in the 2008 war.

The new film accuses Medvedev of betraying Russian interests during the NATO-led military campaign in Libya, citing his decision to abstain from the UN Security Council resolution on Libya that essentially authorised military action in 2011.

That abstention was seen as a landmark moment in Russian foreign policy when Moscow for the first time stopped thwarting Western strategy.

But since Putin returned last year to the Kremlin he previously occupied from 2000-2008, Russia reverted to its previous veto-wielding policy of opposing the West, in particular on Syria.

Evgeny Primakov, a veteran former prime minister and foreign intelligence chief, and several former ambassadors to Libya and officials from Russian arms makers lent their voices to the documentary.

The comments, which appear to be interviews especially made for the film, are interspersed with images of a beaming Medvedev contrasted with children apparently wounded in the Libyan conflict.

“Medvedev deserves to be court-marshalled for his refusal to veto the UN Security Council resolution on Libya,” said the voiceover grimly.

The over one-hour-long film claimed Russia might have sustained losses in the amount of 20 billion dollars because of Medvedev’s policies including his decision to join the Western arms embargo on Moamer Kadhafi’s Libya.

The film quoted Vladimir Chamov, who was fired as Russia’s ambassador to Libya after disagreeing with the official policy, as saying that the losses would unlikely be recovered.

Leonid Ivashov, a retired general and president of the Academy of Geopolitical Problems, lamented in the film that presidents and other top officials could not be prosecuted for treason according to current legislation.

Analysts said the film exposed the vulnerability of Medvedev as the potential victim to be sacrificed should Putin feel a radical change in the cabinet is required.

“Voices in the backrooms can be heard saying Medvedev is the deadweight tied to Putin’s feet. There are forces who want to throw him off,” said Olga Kryshtanovskaya, a political analyst who has for years studied Russian elites.

Until recently a lawmaker in the ruling United Russia party, Kryshtanovskaya said the movie was part of the ongoing campaign to discredit Medvedev and nip in the bud any possibility of him ever returning to the presidential post.

“Two powerful elite groups are fighting with each other. It is not an easy situation,” Kryshtanovskaya told AFP.

Among his critics are believed to be pro-Putin hard-liners, many of them former and current intelligence agents, who believe Medvedev’s attempts at liberalisation during his 2008-2012 term weakened Russia.

Their current hero in the cabinet is the Deputy Prime Minister in charge of defence issues Dmitry Rogozin, a former ambassador to NATO fond of nationalist rhetoric and Soviet nostalgia.

A hitherto obscure activist group has called on the head of the increasingly powerful Investigative Commitee, to conduct a probe based on the film’s claims.

“We are requesting you to verify the facts laid out in the documentary to see if state treason and a corruption component were part of the fateful decisions which inflicted such a massive damage to Russia,” said a statement from the Russian People’s Committee.

A spokesman for the Committee told AFP his group was dedicated to “disseminating the truth about what is happening in Libya, Syria and other countries” without giving further details.