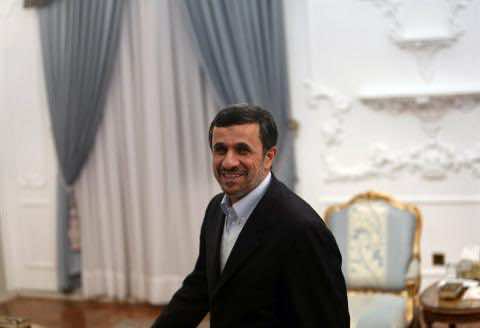 Mahmoud Ahmadinejad held talks in Cairo Tuesday with his Egyptian counterpart Mohamed Mursi on the divisive issue of Syria’s war, as he kicked off the first visit to Egypt by an Iranian president since 1979.

Immediately on being welcomed by President Mursi at Cairo airport, the two leaders held discussions on regional developments and on “how to end the bloodshed in Syria … without military intervention,” MENA news agency said.

Egypt and Iran stand on opposite sides regarding the conflict that has ravaged Syria for almost two years, leaving more than 60,000 people dead according to the United Nations.

Tehran is committed to the survival of Syrian President Bashar al-Assad and his regime. It has supplied financial aid and admitted to sending Revolutionary Guards military advisers to Damascus.

Egypt’s Mursi, though, has sided with Syria’s rebels, whom he sees as upholding the revolutionary ideals that brought him and his Muslim Brotherhood to power as part of the Arab Spring.

Ahmadinejad alluded to their differences before leaving Tehran for Cairo earlier Tuesday.

“If Tehran and Cairo see more eye to eye on regional and international matters, many (issues) will change,” he told reporters, according to Iran’s official IRNA news agency.

Ahmadinejad had earlier indicated that strengthening bilateral ties with Cairo would be a main aim of his visit.

“I will try to pave the ground for developing cooperation between Iran and Egypt,” Ahmadinejad was quoted as saying by IRNA.

Tehran severed relations with Cairo in 1980 in protest at a peace agreement between Egypt and Israel by then Egyptian president Anwar Sadat.

Egypt has responded cautiously to Iranian efforts to revive ties since Mursi took power in 2012, due to their differences over Syria.

Ahmadinejad, president of country with the world’s largest Shiite population, was later to visit the prestigious Al-Azhar institute of Sunni Islam, sources in Al-Azhar said.

The Iranian president will during his three-day stay also attend an Organisation of Islamic Cooperation conference in Cairo and hold talks with Egyptian officials, Iranian media said ahead of his trip.