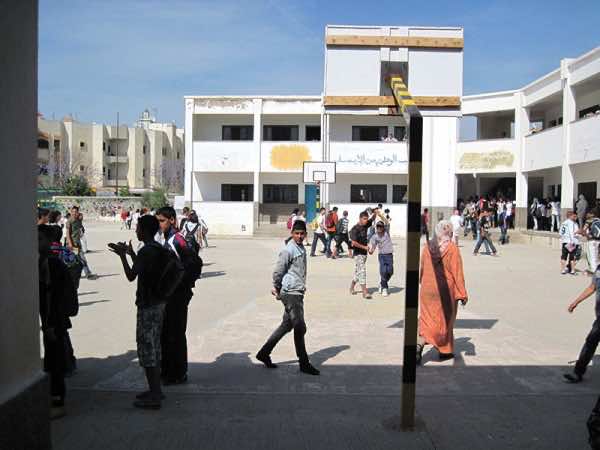 Rabat – Being a teacher, I often hear the complaints of middle-school students.

Many students feel like they are subject to “the Law of the Jungle” while at school, and that these problems take up a lot of their energy, leaving some students feeling very excluded, and very depressed. I asked Rania, age 13, one of my students, if she would like to share what the life of a middle-school student feels like, as well as if she had any ideas about what she would like adults to know. Rania had plenty to say. She tells of some shocking problems, but Rania has some impressive solutions to propose to parents.

Rania Describes the Problems of Students at School:

Rania says, “When children go to school, it’s ‘kill, or be killed!’ In our country, we don’t have this idea of ‘treat others as you want to be treated.’ We instead have the idea, ‘Be mean to him before he does it to you!’ It’s just assumed that others will take advantage of you, so the idea is to take advantage of others before they can do it to you.”

It’s not easy for students to navigate all the different groups in the school, in order to avoid conflict. “There are the athletes, the smokers, the popular-girl cliques who thrive on excluding and putting others down. There are some people taking drugs, and a few people even losing their virginity,” Rania says.

Rania feels that this behavior starts in elementary school, but that teachers are mostly able to keep children under control. However, by the time they get to middle school, this behavior becomes pervasive and there is little the teachers can do about it.

Rania says, “The only reason teachers are respected is because they have power over you to give you a grade. If another teacher is not one of your own teachers, no one will respect him or her. Students get this behavior mostly from watching older kids, and also from seeing it on TV shows. Students also watch how their parents and other adults are behaving, and watch their bad behavior. This behavior is probably just a human behavior, or human nature.”

“When there is a conflict between the student and the teacher, parents are not interested in that,” Rania explains. ”Parents agree with their children 100 percent. So it’s the family against the teacher, instead of the teacher and parent working together to improve the behavior of the student. Parents wouldn’t want to agree with the teacher; they would want only to make their child look good and polite, and respectful.” Rania continues, “Most families tell their children, ‘We’ll be on your side no matter what you do, and we’ll do everything to make sure the teacher has a good view of you.’”

Tellingly, Rania replied to me, “An in-school suspension is far worse, because it makes trouble for the student. He has to spend time working, or be bored sitting in a place.  In out-of-school suspension, most parents let their children have a free day of fun, outside of school. Parents think that bullying is a stupid thing for the school to be concerned about, because they are not going to punish their son for bullying a girl, because it’s not important. What’s important to the parents is getting good grades, and that’s ALL! It’s not important HOW you get the grades—for copying, or for cheating on tests, many parents would just laugh, and make jokes. ’Oh, what have you done?’ they would laugh.  Ha-ha-ha!”

Rania says that many parents also encourage their children on the wrong paths by encouraging them to hit others back, if anyone bullies them at school. She thinks that some parents even approve of their children’s stealing phones from others. Rania says, “There are even some families where if a student steals a phone from someone at school, then sells it for money and buys another phone, then the parents will say, ‘Oh, good! You finally got the phone you want.’”

So the decent and well-behaved students are dealing with all of these problems. ”If you’re disrespectful and mean to the teachers, and laugh at other students, they say you are the ‘coolest’ girl or guy. Where did this idea come from?” Rania wonders.

Sources of these behaviors in students:

Rania thinks that one reason students are acting this way is because they are tired of hearing constantly from their parents, “You have to get good grades!  You have to be good at this!  You have to be respectful and polite!” Rania says that students get tired of this and feel pressured all the time, and that they “pop!” They explode at weaker people, or at whoever they think they can take advantage of.

Rania has some thoughts on why parents pressure their children so much about grades. “In this country, we only care about grades, because most people don’t like school (even parents); they only like money. In order to get money, they have to get the grade. They think school is like very bad work, and adults are even giving this idea to their children. School is not considered enjoyable because you cannot watch TV when you are there, you cannot play your video games, you can’t do lots of things.  Most of your free time is taken up.”

Rania says that in many religious families, students get tired of hearing constantly about what they shouldn’t do. “For example, in a religious family, your parents might say over and over, ‘Don’t drink alcohol, don’t drink alcohol.’ You get so angry and upset about people telling you what to do, that you might just go to a party and try it just to see what would happen!”

Another cause of school problems are jealousies between girls over boys, and jealousies between boys over girls. Rania says, “When you love a boy, and another girl loves the same boy, the girls bully each other through sabotage. You put trash into her bag, or tell people she smells bad, and the other girl might put ants in your food, or start rumors about you, so all this creates many problems. Sometimes boys attack each other if they love the same girl.”

I asked Rania if she thought separate schools for boys and girls would be a good idea. She replied, “If they separated girls’ and boys’ schools, then the coolest people would still be those who had opportunities to meet boys, and hang out with boys.”

Rania’s ideas about what parents should do:

I asked Rania if she had any ideas about how any of these problems could be solved, or improved, and I was quite impressed with her replies.

“Parents need to have regular conversations with their children about why education is important, and help them to see school in a positive way. Instead of saying to children, ‘Tomorrow you have school, so you need to get busy working or sleeping early!’ they should say to their child in a happy way, ‘Tomorrow you will have a great day, and learn lots of fun and interesting things!’ This will put a positive idea about school into their child’s head,” Rania explains. “Parents should not just give children ultimatums about grades, without answering any of the questions in their minds.”

“The second thing parents need to do,” Rania says, “is to take care when their children are young, before school age, to not let them hang out in the street with the wrong people. They need to continue to be careful who their children associate with, even up through high school. People who end up at any age associating with bad people do not do well in school. And they can learn bad things like smoking, addictions, stealing, or even prostitution.”

The third thing parents need to do is to stop ignoring the problem of bullying. “Parents need to be interested in this problem. Parents need to speak to each of their children regularly, and tell them not to treat others badly, to respect others, and to control their bad feelings and emotions toward others. There are some families who do teach this to their children, but most families don’t do it. In the families where this is not taught, these are the disrespectful students.”

Lastly, my own advice to parents, in addition to Rania’s advice, is to remember that your children model their moral codes on parental moral codes and behavior. Remember, your children are watching you, to decide what kind of person they will be.