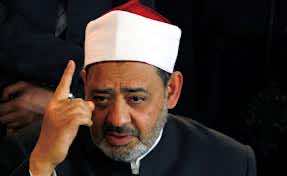 Egypt’s top cleric told visiting Iranian President Mahmoud Ahmadinejad on Tuesday not to interfere in the affairs of Bahrain or other Gulf states, and to uphold the rights of his country’s Sunni minority.

Ahmed al-Tayyeb, the grand imam of Cairo’s Al-Azhar, Sunni Islam’s highest seat of learning, also denounced what he described as the “spread of Shiism in Sunni lands”.

Tayyeb, who made the remarks in a statement after meeting Ahmadinejad, demanded “the Iranian president respect Bahrain as a brotherly Arab nation, and not interfere in the affairs of Gulf states”.

In October, Bahrain summoned an Iranian envoy to protest at Tehran’s “interference” in the Gulf state’s internal affairs. Shiite-ruled Iran has supported protests by Bahrain’s Shiite majority against the Sunni monarchy.

Following Tuesday’s meeting, Ahmadinejad gave a news conference at Al-Azhar in which he said he “came from Iran to say that Egypt and the Egyptian people have their place in the heart of the Iranian people”.

But senior Al-Azhar cleric Hassan al-Shafie, who spoke after Ahmadinejad, launched into a tirade against “some Shiites” for insulting some of the Prophet Mohammed’s companions as the Iranian president listened with noticeable unease.

“The discussions were frank,” Shafie said of Ahaminejad’s meeting with Tayyeb.

Shiites revile some of the Prophet Mohammed’s companions they accuse of usurping power from his nephew Ali, whom they believe was designated as his rightful heir.

Sunnis view this position as heresy, but Al-Azhar had traditionally taken an ecumenical stance on Shiites.

But the Sunni institute has adopted a much harsher tone in the past year, accusing Shiites of trying to spread their doctrine in Egypt and even issuing a statement that used a pejorative term for Shiites — rafidah, or rejectionists.

Al-Azhar’s hardened stance is thought in part to stem from the increased pressure of more conservative Salafi clerics, who share doctrines of Saudi Arabia’s interpretation of Sunni Islam.